Bobcats are adapting to urban and suburban settings. Here’s what to do if you see one
skip to main content

Bobcats are adapting to urban and suburban settings. Here’s what to do if you see one

By Mary Hightower
U of A System Division of Agriculture
Nov. 6, 2019

LITTLE ROCK – As urban and suburban areas expand in Arkansas, the state’s wildlife — including the bobcat — is learning to adapt to new neighbors, said Becky McPeake, extension wildlife specialist for the University of Arkansas System Division of Agriculture. 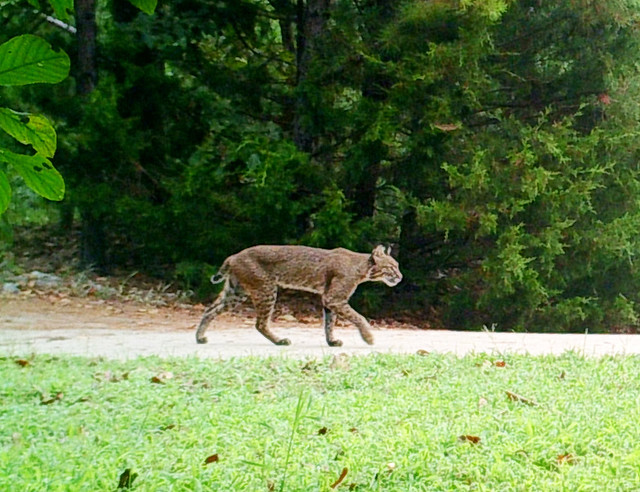 “Bobcats are present in healthy numbers in the state,” she said. “According to the Arkansas Game and Fish Commission, despite popular perceptions of increasing numbers of bobcats, survey data indicate their populations have been relatively stable.”

Bobcats may seem more numerous because of their proximity to humans and people’s ability to differentiate them from domestic cats, McPeake said. Bobcats are not to be confused with mountain lions, which can be up to six feet long and weigh as much as 180 pounds. Mountain lions, also known as pumas, cougars or panthers, are larger, have no spots and have long tails. Bobcats, as their name implies, have short “bobbed” tails, spots, ear tufts and dark shading on their paws. Bobcats can weigh 11-35 pounds and are generally larger than domestic felines.

“Bobcats are typically shy but have learned to adapt to residential and urban environments,” McPeake said. “They roam any areas where they might find their prey and water.”

Prey for bobcats includes a variety of small animals, such as mice, rabbits, reptiles and occasionally a deer. Some suburb-dwelling bobcats also enjoy pets on their menus.

Various news accounts over the last few years in Arkansas have carried photos of bobcats in the suburbs, captured on security or game cameras.

Bobcats can carry rabies, although it’s uncommon, McPeake said. In April 2019, various news accounts detailed a bobcat attack on a golfer and a horse. The bobcat was later captured and tested positive for rabies. There have been no reports of rabid bobcats in Arkansas, nor any Arkansas reports of bobcat attacks on humans.

However, bobcats can carry what’s called “bobcat fever,” a disease that can affect house cats, said Heidi Ward, extension veterinarian for the University of Arkansas System Division of Agriculture.

“Bobcat fever is caused by the tick-borne parasite, Cytauxzoon felis, which can be deadly in house cats,” Ward said. “Bobcats serve as a reservoir for the parasite, so they do not have any symptoms of disease. Cats, however, develop a fever followed by respiratory distress and death.”

Ward said in house cats, “the symptoms may develop anywhere from five to 20 days after the tick bite. Once the symptoms start, cats usually die after a few days if not treated.”

The lone star tick is the main carrier of the parasite.

“Unfortunately, the lone star tick has a very robust population in Arkansas due to our mild climate,” she said.

McPeake has some safety tips for bobcat encounters: