By Ryan McGeeney
U of A System Division of Agriculture
Nov. 16, 2018

LITTLE ROCK – With approximately one-fifth of Arkansas soybean still left to harvest, producers were struck this week with a cold snap that neither sped nor hindered progress; it just made things slightly more miserable. 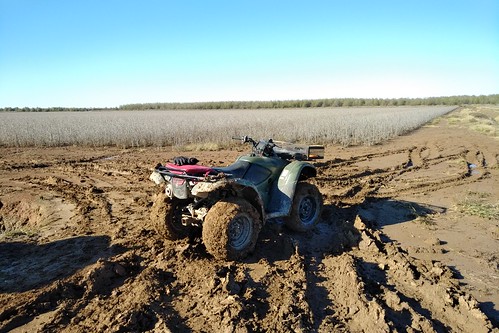 “It’s not helping anything,” said Jeremy Ross, extension soybean agronomist for the University of Arkansas System Division of Agriculture, of daytime temperatures that dipped into the low 30’s across the state.

“If you’ve got high-moisture soybeans, it’s not allowing those beans to dry down as fast as they would if it were warmer,” Ross said. “It also means the soil doesn’t dry out as quickly. A lot of guys are having to rut up fields just to get the beans out.”

Ross said daytime temperatures would have to be below freezing for several days in a row before the topsoil would harden enough to overcome the current state of affairs — soil softened and saturated after weeks of intermittent rains.

Ross said that a silver lining to the week’s temperatures is that they will typically retard any fungal growth occurring on beans still in the field.

Both Ross and Scott Stiles, extension economist for the Division of Agriculture, said that growers are unlikely to leave any soybeans unharvested, unless they’re submerged by late-season rains or completely flattened by some other weather anomaly.

“In my opinion, growers will go ahead and harvest the remaining acres,” Stiles said, noting that more than 700,000 acres of Arkansas soybean remains to be harvested, based on the most recent U.S. Department of Agriculture crop report.

“The Market Facilitation Program payments will likely drive that decision,” he said. “The MFP payments are made on actual production. I think every attempt will be made to maximize the $1.65 per bushel subsidy from MFP.”

Soybean futures prices for the ‘18 crop are still below $9 per bushel, Stiles said, although basis — the difference between the cash price paid and the futures price for a commodity — is improving as growers move into the last quarter of the harvesting calendar. Soybeans futures contracts for January 2019 on the Chicago Mercantile Exchange — commonly referred to as the CME — settled at $8.88 ¾ per bushel on Thursday, up 5 ¼ cents for the day.

Heavy quality discounts from buyers are still pervasive, however.

“One grower mentioned to me this week having a field of soybeans that were discounted $1.10 per bushel,” Stiles said. “So even as we’ve gotten to the later maturing fields, the heavy discounts are still an issue. The frequent rains lately are not helpful.”

Stiles said that some elevators were refusing soybeans that were above 15.5 percent moisture, and exhibited 10 percent or more damage.

“In response, growers are storing a lot more soybeans on-farm this winter,” he said. “Generally, corn and rice would be the crops that go into bins. Lots of storage has been allocated to soybeans following the 2018 harvest.”

Bill Robertson, extension cotton agronomist for the Division of Agriculture, said the last leg of the state’s cotton harvest is moving slowly as well.

“In east Arkansas, we still have a few producers with 200-300 acres remaining,” Robertson said. “That doesn’t sound like much, but with short days and wet, muddy fields, progress is very slow.”

Most of the cotton remaining to be harvested in Arkansas is in the southwestern portion of the state. Robertson said many producers are relying on custom harvesters — independent contractors with specialized equipment — because while cotton acreage continues to expand in the southwest, “the jury is still out, regarding investing in harvest equipment,” he said.

“Reductions in fiber quality, especially color, is having a tremendous impact on lint value,” he said.

Ross said that preliminary germination tests for 2019 soybean seed, conducted by the Arkansas State Plant Board, point to a low-quality start for growers next year.

“The handful of samples they’ve tested up to this point, the average germ has been lower than it has been in several years, and the accelerated aging average is a lot lower,” Ross said. He said that with lower germination potential, soybean growers will need to plant more seeds per acre to achieve yield goals, driving up input costs and making other commodities look comparably more attractive.

“It looks like we’ll have more cotton next year because of the price,” Ross said. “Soybeans are down some, so we may lose some acreage to cotton and to corn, depending on what the price is.”

Whether the increased need for soybean seed per acre leads to short-term scarcity will depend on how growers allocate their fields, both Ross and Stiles said.

“Seed availability may not be an issue if the United States cuts soybean acreage by 4 million or so in 2019,” Stiles said. “That’s a very realistic possibility.  I feel positive we’ll see more corn, rice, cotton next year in Arkansas. Those crops will steal acres from soybeans.  It’s near impossible to see any significant improvement in soybean prices by next spring, with or without a trade resolution with China.  US soybean supplies are just massive, there’s no other way to describe it.”