By Ryan McGeeney
U of A System Division of Agriculture
Nov. 9, 2018

LITTLE ROCK – Consider the peanut: more legume than nut, more row crop than bush or tree. And in Arkansas agriculture, it has often been more specialty crop than practical rotation crop for large-scale, commercial growers. 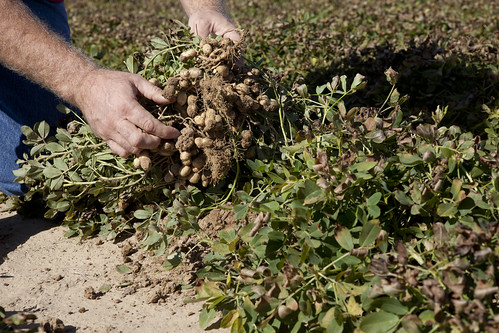 In 2010, however, Arkansas growers began to plant peanuts in sizeable acreages, and have increased steadily much of the time since. Approximately 30,000 acres were planted in 2017, dropping about 3,700 acres in 2018, according to the Farm Service Agency, as rising cotton prices proved increasingly attractive for growers in Arkansas and elsewhere.

Now, as periodic rains continue to dampen the state well into the fall, the state’s peanut growers are facing the same struggles as most other producers: Waiting out the rain, hoping for enough sunny days in a row to further the progress of harvest.

Travis Faske, extension plant pathologist and acting peanut agronomist for the University of Arkansas System Division of Agriculture, said the somewhat complicated nature of harvesting peanuts may make the crop especially vulnerable to the elements.

“With peanuts, we’ve got that extra step,” Faske said. “You dig them out, allow them to dry a bit, then come back to thrash them. There’s a three- to five-day window to allow the peanuts to dry out above ground. If it rains during that window, it just delays things more.”

Peanuts exposed to rainy conditions, once dug but not yet thrashed for an extended period of time, may be vulnerable to the formation of mold and increased percentage of pod rot. While that could affect sales for peanuts being sold as “fresh market” items, it tends not to affect peanuts being sold for use in peanut butter, as are most of Arkansas-grown peanuts, Faske said.

“This has been one of the worst harvest seasons growers have seen, if they’re new to peanuts,” Faske said. “We’ll have a pretty good idea of their interest in peanuts after this season.”

As of Nov. 4, Arkansas growers had harvested approximately 53 percent of all peanuts planted in the state, significantly behind the 83 percent harvest rate at this point in last year’s season, according to the USDA’s National Agricultural Statistics Service.

“The frequency of rainfall has really slowed things down,” Faske said. “We would be right in line with where we’d normally be, had we not had that rain at the end of September, and throughout October.”

Faske said that as temperatures continue to drop, Arkansas growers may be faced with a tough choice.

“We’re running the risk of peanuts freezing in the field,” he said. “If it does freeze, that will speed up this harvest window. “If 50 percent of the vines freeze, the pegs become loose, which means the grower probably needs to harvest within seven days. A freeze is likely to happen this month, meaning the growers are likely going to get into crunch time, sooner than later.”

The current market for peanuts is also something of a seesaw, sandwiched between large amounts of harvested peanuts already in storage, and drastic reductions in production from major peanut produces such as Georgia, which dropped from about 800,000 peanut acres to 650,000, and may see even greater reduction in production due to hurricane weather events.

“If Georgia has a substantial number of acres that aren’t harvested, or destroyed by one of these recent hurricanes, that could impact the futures market,” Faske said. “Arkansas isn’t the only state impacted by bad weather this year.”