By Mary Hightower
U of A System Division of Agriculture
Nov. 9, 2018

The flies pose no danger to equines as adults, but “their immature stages – the bots – are internal parasites that can cause damage to the stomach lining which can lead to major health issues including intestinal blockage, colic and sometimes death,” said Kelly Loftin, extension entomologist for the University of Arkansas System Division of Agriculture. 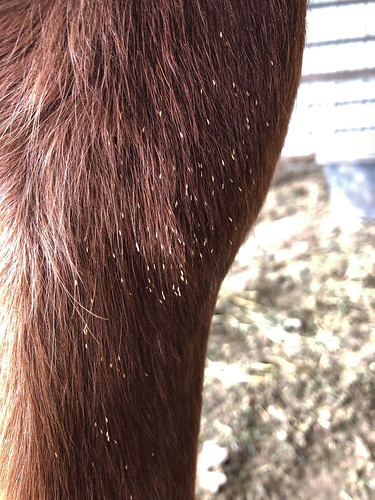 “Most areas of the state will receive at least one killing freeze over the weekend,” Loftin said Friday. “This signals the best time to treat our horses for bots because the egg-laying adults will die from the cold temperatures. Even equine owners that diligently remove bot eggs throughout the summer and fall should treat their horses, mules and donkeys for horse bots.”

Adult female bot flies attach eggs to the hairs of the host’s body similar to lice.

“For the horse bot fly, egg hatching is stimulated by moisture and friction from licking,” he said. “Larvae gain access to the host’s mouth by this licking, and burrow into the tongue or gums. They remain there for about a month then pass to the stomach attaching to its mucous membrane where they remain for about nine months.”

Eventually, the larvae detach and are passed out of the body through feces.

Loftin said horse bot flies may cause significant damage to the stomach lining and possibly stomach rupture or colic if the passageway between the stomach and small intestine becomes blocked. The life cycle of the throat and nose bot flies are similar to the horse bot fly, except that mature nose bot fly larvae attach to the rectum near the anus, and the mature throat bot fly larvae attach in the duodenum — the first section of small intestine — near the pylorus.

Chemical control of horse bots is aimed at the parasitic stage within the animal. Avermectin formulations of horse dewormers containing ingredients such as ivermectin or moxidectin are effective in controlling bots. These products are relatively easy to use, fall treatments should be administered after fly activity ceases, generally after the second killing frost.

Non-chemical bot fly control is aimed at the eggs. Equine owners can frequently sponge the horse with warm water or to stimulate hatching of bot fly eggs. New hatched bot fly larvae quickly die especially if done on a cool day. For the horse bot, Loftin recommends concentrating efforts on the animal’s legs between the hock and fetlock and knee and fetlock. Also applying insecticidal washes to egg laying sites can reduce the number of larvae ingested by the animal. Bot combs or pumice bot stones are used to scrape away the eggs.

“These remedies should reduce the number of bot fly larvae ingested by the animal, but will not control any larvae that are ingested,” Loftin said. “Because of the seriousness of bot fly infestations, treatment with a boticide to control the parasitic stages is recommended.”

“Very rarely, horse bots fly can infest the human eye, a condition called ocular myiasis, or the skin, called cutaneous myiasis,” Loftin said. “These cases are rare, but can occur in individuals handling horses that have bot fly eggs on their hair.

“On these rare occasions, bot fly larvae will enter the eye, possibly from humans rubbing their eyes. In cutaneous myiasis, visible, inflamed tracks will appear along with irritation and itching from the larva’s burrowing in the skin,” he said. “People working with horses during bot fly season should not rub their eyes after combing or washing animals before thoroughly washing their own hands.”