By Ryan McGeeney
U of A System Division of Agriculture
Nov. 5, 2018

NEWPORT, Ark. – As the No. 1 industry in Arkansas, agriculture is often a top concern for the state’s legislators, both within Arkansas borders and in the nation’s capitol. For more than 20 years, experts with the University of Arkansas System Division of Agriculture have been working to help educate government leaders and their respective staff members on the critical issues facing Arkansas producers at any given time. 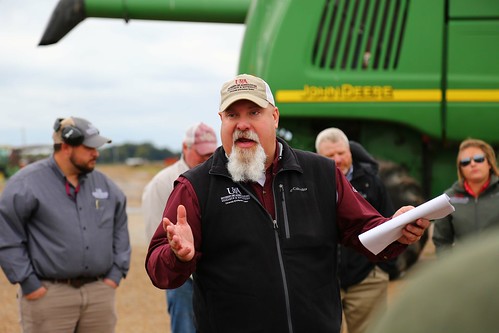 Most recently, Division of Agriculture administrators and researchers, along with several industry leaders, hosted nine congressional aides for a tour both research and academic facilities, as well as working farms and production facilities, in central and northwest Arkansas. Aides representing the offices of U.S. Reps. Bruce Westerman, Steve Womack, Rick Crawford and French Hill, as well as U.S. Sen. John Boozman, participated in the tour.

Chuck Culver, director of external relations for the Division of Agriculture and a former congressional aide himself, has coordinated the tours for several years. The tours occur at least every other year, although the Division of Agriculture has hosted the tour annually for several years now. Each tour focuses on specific aspects of the state’s agriculture about which the state’s congressional delegation expresses interest, as well as critical issues the division staff feel are important to emphasize.

“We get house and senate agricultural aides,” Culver said. “For this tour, the Arkansas Congressional delegation wanted to concentrate on row crop and nutrition programs. If they’re flying in from D.C., they’re here for about 72 hours. In that time span, we get into all four congressional districts, and have a meaningful tour stop in each one.”

The nine aides flew or drove to Little Rock on Thursday, Oct. 25, and drove the next morning to Newport, where the owners and operators of the Hare Planting Co., Inc. farm, along with experts from the Division of Agriculture and the U.S. Department of Agriculture’s Natural Resources Conservation Service, spoke to the group about conservation practices, water management and duck habitats.

The group was given in-depth explanations of the challenges facing row crop farmers regarding water use and quality, by both Mike Hamilton, irrigation educator, Mike Daniels, professor of crop, soil and environmental sciences, both of the Division of Agriculture, and others.

The tour then proceeded to the Newport Extension Center, where Jeremy Ross, extension soybean agronomist, and Tom Barber, extension weed scientist, both of the Division of Agriculture, spoke about issues facing soybean growers and other row crop farmers. Topics included dicamba volatility and soybean injury, the prevalence of Palmer amaranth —commonly known as pigweed — and the steep quality discounts facing growers in the marketplace.

Barber, like many experts within the Division of Agriculture’s Cooperative Extension Service, has a joint appointment with the division’s Arkansas Agricultural Experiment Station.

“We don’t shy away from controversial issues,” Culver said. “We tend to tackle them head-on, and provide them with good, unbiased information and resources they can contact.

“We look for emerging issues, or critical issues of the moment,” he said. “This tour was no different.”

The tour later continued on to Mulberry, where the visiting aides toured facilities at American Soybean and Edamame, Inc., meeting with Ryan Castleberry, director of manufacturing, and Nathan McKinney, assistant director for the Arkansas Agricultural Experiment Station. Saturday, the congressional aides joined presentations at the Arkansas Research and Extension Center in Fayetteville on turf grass research, the Rice Processing Research Program, the Arkansas Food Innovation Center and the Arkansas Procurement Assistance Center.

“It is always good to see the interest from our congressional offices in the exciting and challenging issues that face Arkansas agriculture and our rural communities, especially from the federal perspective,” said Mark Cochran, vice president for agriculture for the University of Arkansas System.

Culver said that while the tours serve primarily to familiarize congressional aides with agricultural issues in the state, it also gives them the chance to get to know one another.

“You’d be surprised — even though there are only four house members and two senators, the staffs sometimes just don’t have the opportunity to get together,” he said.