By Sarah Cato
U of A System Division of Agriculture
Nov. 2, 2018

FAYETTEVILLE, Ark. – The busloads of students and teachers that came to the Insect Festival of Arkansas expected a day of noisy fun, intriguing sights and musical theater; but many left the venue with a new perspective on bugs and science itself. 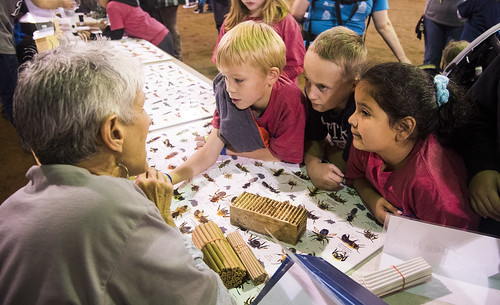 More than 1,900 Northwest Arkansas school children, toddlers and adults attended the biennial festival on Oct. 11, where the Pauline Whitaker Animal Science Center was packed with various booths showcasing different areas of study in the field of entomology.

While the youngsters eagerly pounded a tabletop to urge on their contestants in the cockroach races or quietly marveled at the butterfly house, learning was casting its spell.

“I think we have changed children’s views about insects, diversity, beauty, importance and how insects interact with us on many levels, from pollination to pests,” said Don Steinkraus professor of Entomology for the Bumpers College of Agricultural, Food and Life Sciences, and the University of Arkansas System Division of Agriculture.

Just as important, the youngsters were learning about the people behind the science. Fiona Goggin, professor of Entomology for the Bumpers College of Agriculture, Food and Life Sciences and the University of Arkansas System Division of Agriculture, piqued visitor interest with her two booths: “Aphids: Plant Vampires” and “X-Files: DNA and Mutants.” Not exactly what’s expected a science fair. That accessible approach earned Goggin and a colleague rock star status.

“In a previous year, two elementary-aged girls asked me and a female postdoctoral fellow if we were really ‘real scientists,’ and then asked for our autographs when we said yes!” Goggin said.

“At our aphid booth, the kids examined aphids and the plants cells they feed on under microscopes, observed different stages of the insect life cycle, and learned about how and why ants ‘farm’ aphids for their honeydew,” she said. “At our DNA and Mutants booth the kids observed fluorescently labeled DNA samples and examined fruit flies under microscopes to identify differences among them and generate hypotheses about which ones were ‘mutants.’”

Goggin said although the festival involved quite a bit of work, it was worth it in the end.

“Throughout the day we had a continuous stream of interested visitors, young and old, who had many questions,” she said. “By the end of the day I was hoarse, but happy.”

Although there was a plethora of attractions, both insect and not, there were a few that garnered a little more interest.

“The musical theater, zoo, cockroach races, the butterfly house, the museum and the crafts seemed to gather the most attention,” Steinkraus said “But, in fact, all the exhibits were surrounded by people.”

With four showings of the Insect Musical Theater, the stars of the show were tired but content.

“I spent most of the day playing guitar in the musical theater,” Steinkraus said. “Children were so excited about it. I had parents come tell me that immediately after leaving the theater their children would go to the insect zoo and ask about metamorphosis. In other words, parents told me that their children had learned a lot.”

“The theater was a lot of fun for our kids,” said Brandy Cordeiro of Gentry Primary School. “Two of my students were chosen to participate with the actors and they loved it!

For more information on entomology in Arkansas, contact your local county agent or visit entomology.uark.edu.