Career cattle breeder, geneticist comes home to U of A after nearly 40 years in the field
skip to main content

Career cattle breeder, geneticist comes home to U of A after nearly 40 years in the field

By Ryan McGeeney
U of A System Division of Agriculture
Nov. 2, 2018 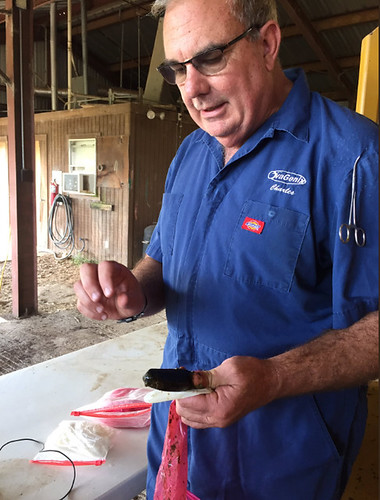 Officially attached to the Southwest Research and Extension Center in Hope, Looney said he will likely divide much of his time between research facilities in Hope, Batesville and Fayetteville, when not visiting with cattle producers across Arkansas.

“The whole state is my area,” Looney said.

Looney completed his Master of Science degree in animal science at the University of Arkansas in 1979, and his doctorate in reproductive physiology at Louisiana State University in 1984. For more than three decades hence, Looney worked in the private sector, facilitating reproductive services for cattle producers and breeders across the United States, as well as Europe, Asia, Central America and South America.

Throughout his career, he maintained ties with the faculty and staff at the University of Arkansas Animal Science Department, and, over the last few years, kept an ear to the ground for opportunities to return to his alma mater.

“I basically came back to Arkansas to finalize my career, and help build that legacy with proven cattle,” Looney said. “I grew up in South Arkansas, and went to school in Fayetteville. It was just an opportunity for me to come back to the state and give back to the people who gave me so much.”

Looney said his primary focus will be developing programs to improve cattle genetics, using reproductive technologies. He will work, in part, with a cattle herd maintained at Hope.

Terry Kirkpatrick, acting assistant director of the Southwest Research and Extension Center, said he had told a group of producers that Looney would “take us into the 21st century” with new technology in embryo transplants, artificial insemination and beef cattle herd improvement.

“But I was quickly corrected,” Kirkpatrick said. “One of the growers looked at me and said, ‘Charles is not going to use the technology. He is the technology.’”

Kirkpatrick said that while Looney’s appointment has brought the department forward by “a quantum leap,” he was generally known to be very approachable by producers in the field.

“He’s a very down-to-earth gentleman,” Kirkpatrick said. “Technology-wise, he’s top-of-the-line, but he’s also a good communicator. He’s already started reaching out to the producers in this area, talking to them about what they need, and educating them about some new things that are available to them.”