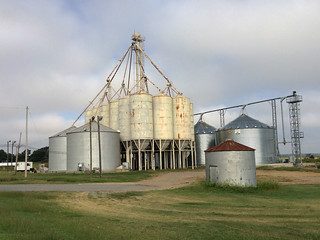 GRAIN BINS - Grain storage bins along U.S. 165 in the Arkansas Delta. (U of Arkansas System Division of Agriculture image by Kerry Rodtnick)

JONESBORO, Ark. -- Corn growers across Arkansas are increasingly taking matters into their own hands, erecting on-farm storage facilities to help them more efficiently market and harvest their product, rather than relying on commercial grain elevators.

Over the past decade, growers in Arkansas have increased their on-farm storage by about 70 million bushels, or about 52 percent, according to Scott Stiles, an extension economist with the University of Arkansas System Division of Agriculture.

With many growers across the state shifting from cotton to corn production, "that sharp rise is consistent with the 141 percent increase in corn acreage seen over the same time period," Stiles said.

Kris Baker is one of the growers who moved into on-site storage at his farm in Sherrill in Jefferson County.

By storing their grain themselves, growers don't have to transport their crops as far and can get it out of the field more quickly. They can also dry the corn themselves, which allows them to harvest earlier at higher moisture levels without paying drying charges assessed by commercial grain brokers.

"It enables us to be able to harvest our crops and dry our crops and store our crops indefinitely," said Tommy Young, a corn grower based in Tuckerman who has been using on-farm storage for more than 30 years.

The ability to speed up the harvest also allows growers to avoid losses caused by weather, according to Jason Kelley, a UA extension agronomist for wheat and feed grains. Several years ago, with a hurricane threatening, one producer with on-farm storage harvested around the clock and was nearly done by the time neighboring growers got started, Kelley said.

Having a way to store their own grain also allows growers to hold out for higher prices because during the fall harvest, prices often drop as elevators become flush with large quantities of grain, Stiles said. Growers can also defer their tax liability on the grain by holding on to it rather than selling.

On-farm storage also allows growers to sell directly to buyers. In Arkansas, the poultry industry in a large consumer of corn and offers attractive prices and a year-round market for producers, Stiles said.

While on-site storage has shifted some production away from commercial elevators, that has been more than offset by the overall increase in corn production, Stiles said. And spreading out the marketing of corn year round has also stabilized prices, he said.

Rising demand for corn in recent years, fueled in part by increased production of ethanol, has prompted many growers across the Mid-South to shift from cotton to corn production, which has become more profitable. And those profits have encouraged growers to make the capital investment in storage bins.

"Today, grain bins can typically be financed for 10 years at rates near 4 percent," Stiles said. "It appears growers see that they can recoup their investment in that length of time. And more importantly, their lenders do as well."

The U.S. Department of Agriculture is also encouraging on-site storage with a program that allows growers to borrow up to $500,000, with just a 15 percent down payment and terms ranging from 7 to 12 years, Stiles said.

Young cited another financial benefit of on-farm storage: Growers can use stored corn as collateral for loans to provide more working capital, while keeping the corn to sell down the road.

Increased production of corn also has benefits for other crops. Both Baker and Young rotate their fields between corn and soybeans, which they say has increased the yields of each.

"The corn-soybean rotation really works for us," Baker said. "It's a good crop. It helps the soil."

Stiles said there are indications that the pronounced shift from cotton to corn may be slowing, in part because corn prices have been falling. But he said the increased use of on-site storage is an indication that many growers see corn as an important part of their future.

"Many are deciding that corn can be a permanent part of their crop mix, providing prices remain profitable," he said. "Producers are also taking the long view and seeing a more optimistic demand story for corn that's tied to ethanol and emerging market feed demand."