By Sarah Cato
U of A System Division of Agriculture
May 10, 2019

FAYETTEVILLE, Ark. – When it comes to weed control in Arkansas, farmers need every tool available in order to maintain profit. 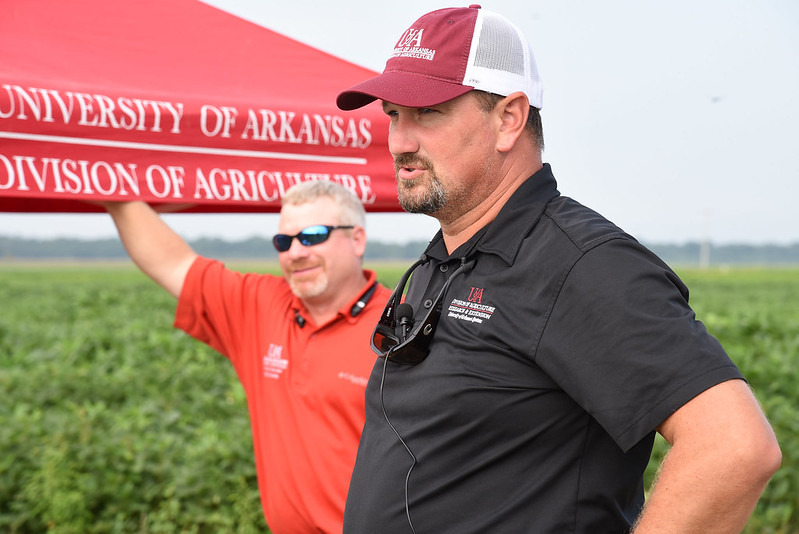 “We’ve tested a wide assortment of herbicides from different groups or modes of action over the last several years. Those that contain metribuzin tend to perform best on Palmer amaranth in these field trials,” Norsworthy said. “I’m not saying metribuzin by itself, but metribuzin in combination with some other herbicides is needed on most Arkansas soybean acres.”

Metribuzin uses the same mode of action as the chemical atrazine, which is used in corn. Atrazine is typically mixed with an HPPD herbicide, which inhibits the 4-hydroxyphenylpyruvate dioxygenase enzyme in the weed. Previously, HPPD herbicides could not be used in soybeans because of their sensitivity to the chemistry. However, that may be changing.

“There’s some new technology coming forward in soybean called the LibertyLink GT27 that is now available to growers,” Norsworthy said. “It allows for use of glyphosate and glufosinate over the top of the crop and isoxaflutole as a pre-emergence herbicide as soon as the EPA approves use of the latter herbicide.”

Glyphosate is most familiar as Roundup; glufosinate as Liberty and Interline; isoxaflutole is marketed as Alite27.

“We see the benefits of taking an HPPD herbicide like Alite27 and mixing it with metribuzin, and we see extended residual weed control,” he said.

“Farmers need to remember that soybean varieties are sensitive to metribuzin,” he said.

Norsworthy and his team are screening for metribuzin tolerance in Arkansas Official Variety Trial for soybeans as well as a large portion of the germplasm that’s available today within the industry.

“There’s been a major focus on trying to breed for greater tolerance to metribuzin over the past eight to 10 years,” Norsworthy said. “I think the industry as a whole understands the need for using metribuzin as a viable component of our weed control programs.”

“When we combined metribuzin with other herbicides, those were the most robust residual programs that we have,” he said. “Hence the need to continue screening soybean germplasm, making sure the Arkansas grower is making an informed decision when they choose a variety.”