MONTICELLO, Ark. — Once common throughout the bottomland hardwood forests of eastern Arkansas and neighboring states, the native black bear was nearly eradicated by the early decades of the 20th century. 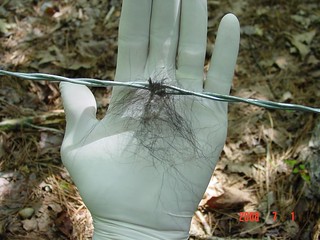 The bears have bounced back in southeast Arkansas, thanks in part to relocation efforts, but the degree of their success is unknown.

White is a wildlife ecologist with the University of Arkansas System Division of Agriculture’s Arkansas Forest Resources Center and the James M. White Endowed Professor of Wildlife Ecology at the University of Arkansas, Monticello, School of Forestry and Natural Resources. He is the principle investigator in a study funded by a $338,000 grant from the Arkansas Game and Fish Commission.

Most of the AGFC grant — about 75 percent — is provided by the Federal Aid in Wildlife Restoration Act administered by the U.S. Fish and Wildlife Service for wildlife restoration programs and hunter education.

A bear hair snare is simply a circular corral of barbed wire, White said. The barbed wire is nailed to trees about knee high above ground level. Bears attracted to a scent lure placed in the center of the corral often leave hair samples on the barbs.

White’s collaborators on the project, Marlis Douglas and Michael Douglas of the University of Arkansas’ Fulbright College of Arts and Sciences, will extract DNA from the hair samples for analysis.

White will use DNA analysis to estimate genetic diversity and population abundance and density of bears in eastern and southern Arkansas. He also wants to see if animals from the Ouchita Mountains or other habitats are contributing to a relocated population in the Felsenthal National Wildlife Refuge.

By about 1940, White said, the Arkansas population of Ursus americanuswas reduced to less than 50 individual bears in the Lower Mississippi River Alluvial Valley — often referred to, erroneously, as “the Delta.”

Most of those surviving bears were in the area now known as the Dale Bumpers White River National Wildlife Refuge, which begins south of Clarendon in Monroe County and follows the White River nearly to its confluence with the Mississippi River.

Black bears in the White River Refuge has recovered since the 1940s, but the bear population in southeast Arkansas is fragmented, small, and susceptible to human activities, White said.

“Black bears are considered poor colonizers of vacant habitat,” White said, “because female bears typically do not disperse from the home ranges of their mothers.”

White said the forests in that area are also fragmented by land cleared for agriculture.

Bear survival rates at Felsenthal were generally high. Homing rates, the tendency to return to the area where they come from, were low, White said. Radio-tracking ended in 2003 and the number of bears, the population growth rate, and the level of success of the reintroduction program are unknown.

Meanwhile, black bears in the Ouachita Mountains of western Arkansas are expanding their range southward and eastward and may have immigrated as far southeast as the Felsenthal Refuge. The Ouachita bears are genetically distinct from their eastern neighbors and the extent to which they may be contributing to the bear population in southeast Arkansas is unknown.

White plans to set out the barbwire snares over the summers of 2018 and 2019.