LITTLE ROCK – Warm, dry weather had benefits for some Arkansas farmers; with 94 percent of corn and 95 percent or rice rated fair to excellent condition, according to the National Agricultural Statistics Service. 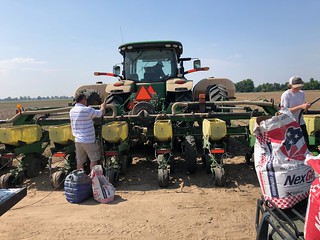 The weekly crop report listed many Arkansas crops as being in fair to good condition, with more than half of corn, rice and wheat rated as good to excellent.

Rain was reported as moderate with the majority being in northeastern Arkansas and a state average of 1.84 inches.

Winter wheat harvest started on a limited acreage this week in southern Arkansas. Preliminary results indicate good grain quality and average yields despite a tough growing season highlighted by too much rainfall during winter and spring months.  Most of the wheat in the state is still a week or two from being ready to harvest, but producers will anxious to get wheat harvested so that double crop soybean can be planted timely.  Warm dry weather is needed for harvest to progress much this coming week.

Jason Kelley, wheat and feed grains extension agronomist for the University of Arkansas System Division of Agriculture said last week was a week of replanting for corn producers.

“Corn producers were able to finish up the last corn replanting last week,” Kelley said. “Several acers had to be replanted this year due to poor stands caused by heavy rains in April.”

Grain sorghum had a productive week with planting up 20 percent from the previous week, and emergence up nearly 30 percent.

“Grain sorghum planting was estimated to be about 90 percent complete,” Kelley said. “It should be finished this week with good planting conditions.”

Eighty-seven percent of Arkansas peanuts were planted with 48 percent emerged.

Travis Faske, associate professor and extension plant pathologist for the University of Arkansas System Division of Agriculture, said performance for Arkansas peanuts was a result of the weather.

“I would say it was all weather-related,” he said, “and it has been somewhat of a roller coaster start to the 2018 cropping season.”

Faske said what started as a good month, turned unfortunate for many peanut growers.

“May started out with warm, drier field conditions that favored peanuts,” he said, “however, hot, dry, windy conditions dried out soil moisture in some areas that slowed or stopped some peanut farmers.”

But thinking big picture, peanut crops in Arkansas seem to be doing well.

“Overall, what has been planted is in good shape and we have a good start for the 2018 peanut crop,” Faske said. “If we can get the remaining crop planted before June that would be ideal, so all eyes are on the weather forecast as we enter the final weeks of May.”

Soybeans were 81 percent planted, well up from the previous week’s 62 percent. Sixty-one percent of the crop had emerged.

Jeremy Ross, extension soybean agronomist for the University of Arkansas System Division of Agriculture, said planting has been the focus for many soybean producers, but lack of rainfall has been problematic.

“Since planting for most other row crops is almost completed, producers have been concentrating on getting the soybean crop planted,” he said. “With above average temperatures and spotty rainfall last week, soil moisture in many fields was quickly lost. Some producers were planting into dry seed beds, while others were waiting for a rain before planting.”

Growers may have planted earlier than past years, but the dry conditions could cause a drop in yield.

“We are well ahead of the five-year average on planting progress and soybean emergence. Most of this is due to the dry conditions we have had so far this season, unlike a typical May for Arkansas,” he said. “My main concern is soybean emergence in areas where there was very little moisture at planting and no rainfall to add more moisture to the field.”

This lack of moisture has also led to herbicide and weed problems.

“The other concern is the lack of moisture in some fields has not activated residual herbicides,” he said, “and we’re getting reports of heavier than normal weed emergence due to herbicides not being activated.”

Ross said these dry temperatures are not indicative of a high-yielding growing season for soybeans.

“All our data indicated that soybeans planted prior to mid-May will yield more than later planted soybeans,” he said, “but if we continue to have an unseasonably hot, dry weather pattern, yield may be reduced due to unfavorable conditions later in the summer.”

Rice planting was nearly complete at 96 percent, with 85 percent emerged. The planting rate was up from 90 percent five-year average. Eighty-one percent of the crop was in good or fair condition with 14 percent rated excellent.

Jarrod Hardke, extension rice agronomist for the University of Arkansas System Division of Agriculture, said rice in Arkansas is looking good so far.

“It’s important to note that 71 percent of the crop is rated good to excellent,” Hardke said. “We have the abnormally warm weather to thank for that, which followed a record-cold month of April.”

Hardke said rice is powering through the unusual weather and coming out on top.

“These conditions haven’t been perfect,” he said, “but rice has responded to it very well recently. Scattered rains over the past week, combined with growers flushing fields that needed it, certainly contributed to the positive feeling about the crop right now.”

The Cooperative Extension Service
U of A System Division of Agriculture