(Newsrooms: with art at https://flic.kr/s/aHsmjqCDcj)

MONTICELLO, Ark. – When Hunter Stafford and Chase Milligan examined their take following some January goose hunting in Lincoln County, they noticed something wasn’t quite right with one of the birds.

The two had been hunting for white-fronted geese, better known as specklebellies in Lincoln County near Dumas. Their harvest for that day included a bird that looked similar to a specklebelly but had an unusually dark face and lacked the black marling that specklebellies have on their chests. 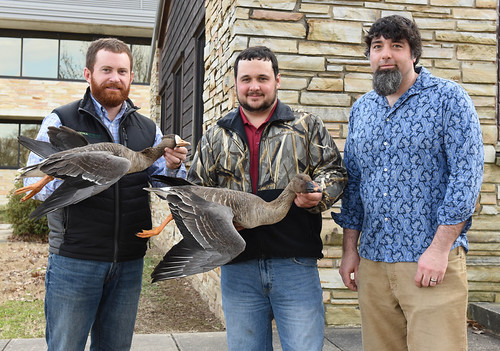 RARE BIRD — From left, Chase Milligan, Hunter Stafford and Douglas Osborne. At center Stafford is holding the goose which may have originated in Russia. (Image courtesy UA-Monticello)

For identification, the goose was taken to said Douglas Osborne, associate professor with the Arkansas Forest Resources Center and the School of Forestry and Natural Resources at the University of Arkansas at Monticello, and a waterfowl researcher.

The lab measured of body size, weight, and gender of the goose, along with noting its coloring. From that information, Osborne and his lab determined from body size and coloration that the rare goose was likely a subspecies of a taiga or tundra bean goose.

To confirm this, genetic tissue and feather samples were collected from the specimen and sent to the United States Geological Survey genetics laboratory in Anchorage, Alaska, for mitochondrial DNA sequencing. The genetic sequence of Stafford and Milligan’s prize goose was compared to a database of known bean geese collected at breeding and wintering locations from across the world.

“The rare goose was determined by genetics to be a 100 percent match of the tundra bean goose subspecies Anser serrirostris that was sampled on Lake Kejonuma, Japan,” Osborne said. “The Arkansas specimen was also a 99.1-99.5 percent match for the same subspecies collected in the Russian Arctic during the breeding season.

The bean goose subspecies is frequently observed in Alaska during winter, and evidence suggests that this goose originated in the Russian Arctic and ended up in Arkansas as she mixed in with a flock of Alaska nesting white-fronted geese that commonly winter in the Delta region of Arkansas.

“This is the first ever record of a tundra bean goose in Arkansas,” Osborne said. “This rare encounter will be preserved by a local taxidermist and will likely be a conversation piece in the hunting lodge for many years to come.”

“This is another example of the strength we have in natural resources research,” said Phil Tappe, director of the Arkansas Forest Resources Center, for the University of Arkansas System Division of Agriculture. “We are not only working to educate the next generation of natural resources professionals, but also improving this generation’s knowledge base.”