Bloat in cattle – How real is the risk?
skip to main content

Bloat in cattle – How real is the risk?

LITTLE ROCK – Bloat in cattle is a seasonal problem for producers which can be caused by grazing forage such as certain legumes and to a lesser extent by the fresh growth of winter annual cereals and leafy forages such as turnips.

Dirk Philipp, associate professor-forages for the University of Arkansas System Division of Agriculture, says bloat is caused by gas build up in the rumen. 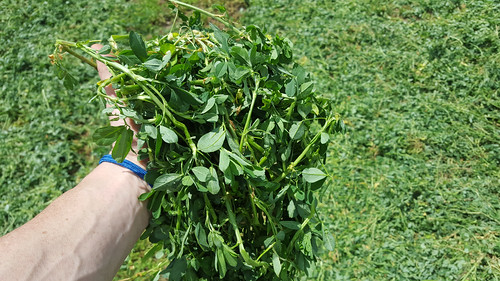 BLOAT SOURCE — Grazing fresh young alfalfa can induce bloat in cattle. Bloat can sometimes be fatal to cattle. (U of A System Division of Agriculture photo by Dirk Philipp).

“Bloat is caused by the development of frothy liquid in the rumen. If gases build up in the rumen and create a stable foam, they push against the diaphragm which will suffocate the animal by keeping the diaphragm from being able to move air in and out of the lungs,” Philipp said.

“The window to catch an animal with bloat and remove from a paddock is very narrow,” Philipp said, “so the focus should be on prevention.”

Forages that carry a risks for inducing bloat include:

Philipp said these forages may pose a risk because of their high level of digestibility and low level of dry matter at certain times during their growing cycle.

“These forages are all highly digestible,” he said. “Rumen microbes have access to the protein in these forages very easily. When these microbes digest the forage they release gas, which builds up in the cow’s rumen. This gas mixes with liquids, which is how the froth and stable foam develops.”

These high-risk forages all occur in Arkansas, but most of the time they do not cause a problem.

“Clovers don’t really persist well in Arkansas and normally these forages are grazed in conjunction with other non-bloating forages,” Philipp said, “and the total amount of these forages is normally relatively small in pastures.”

Along with identifying high-risk forages, producers should also be aware that bloat is animal specific and depends on environmental factors.

“Day temperatures around 70 degrees and cool overnight temperature will lead to a higher risk,” Philipp said, as these are good growing conditions for higher-risk forages, “and high soil moisture, which leads to high plant moisture, will also increase risk. High plant moisture relates to lush forage with low dry matter values. Lower dry matter means higher risk because the percentage of protein will be higher in relation to fiber.”

Fields of entirely clovers or alfalfa are definitely at risk if:

Product names mentioned in this story do not imply endorsement by the University of Arkansas System Division of Agriculture.

For more information about cattle and forage production, contact your county extension office or visit www.uaex.edu.

About the University of Arkansas System Division of Agriculture