Norsworthy, nationally-recognized U of A weed scientist, shepherds next generation to the fore
skip to main content

Norsworthy, nationally-recognized U of A weed scientist, shepherds next generation to the fore

By Ryan McGeeney
U of A System Division of Agriculture
May 11, 2018

FAYETTEVILLE, Ark. —  For many staff and faculty within the University of Arkansas System Division of Agriculture, most work days begin at 8 a.m. But when you’re riding herd over more than a dozen graduate and post-doctoral students at one of the country’s most sought-after weed science programs, you’re going to want to go ahead and give yourself a two-hour head start. 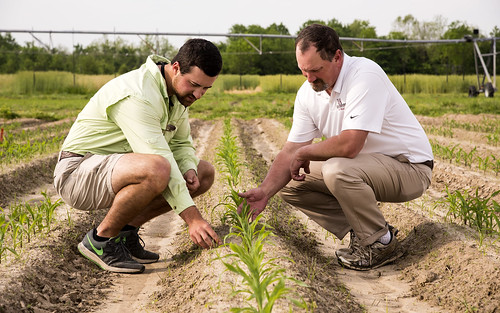 Jason Norsworthy, Professor of Weed Science within the Dale Bumpers College of Agricultural, Food and Life Science, said he comes in most days at 6 a.m.

“There’s a lot of fundraising and networking inherent in managing a program like this, and I can get more of that done — returning phone calls, sending emails — in those first two hours than I can the rest of the day, once the phone starts ringing and students start coming by,” Norsworthy said.

Norsworthy, who was earlier this year named a fellow of the Weed Science Society of America — an unusual honorific accomplishment for anyone not rapidly approaching retirement — currently leads one of the most sought-after weed science programs in the country, attracting graduate students from across the United States and beyond.

Robert Bacon, head of the Crop, Soil and Environmental Sciences Department, said that while some research programs prefer to simply hire full-time employees and technicians to assist in university research, Norsworthy has incorporated the inherent mentorship aspect of deploying graduate and post-doctoral students to pursuing the Division of Agriculture’s weed science research.

“With this approach, not only do you get the work done, the resulting product is bigger than the research itself,” Bacon said. “It’s the development of people.”

“One reason people sometimes choose to do it the other way is because working with graduate students just takes so much more time. But Jason thinks it’s worth it, and so do I,” he said.

Naturally, an understanding of how to control weeds in row crops and other agricultural ventures is key to farming anywhere in the world. Part of the appeal of Norsworthy’s program is that it gives graduate students the opportunity to develop their own scientific research skills to a level that can then land them sought-after positions throughout the world, he said.

The efficacy of Norsworthy’s approach can be measured, in part, by his former students’ achievements and affects on the larger scientific and agricultural community.

“For me, seeing the students succeed while in the program and following completion is the most rewarding part of this,” Norsworthy said. “I get up every morning and get excited when I see the honors these current and former students receive.”

“I still remember those days from Clemson when Dr. Norsworthy used to spend endless hours with me and other fellow graduate students in fields during the summer, and working with us on data analysis and presentations until late night in preparation for the professional weed science meetings,” Jha said.

“Dr. Norsworthy shaped my career as an effective writer, thinker, and a successful weed scientist,” Jha said. “His graduate students excel in weed science discipline, academia or industry — I’m not aware of any other weed scientist in the United States who has achieved such a high level of national and international reputation for graduate education and research in such a short period of time.”

Mason Young, a technical sales specialist with the SePRO Corporation, credited Norsworthy’s program with helping him to become a more well-rounded weed scientist, after having already completed several internships in the field of crop science.

“In his program the graduate students work as a team,” Young said. “We worked together to get the large amount of research he has completed. I was not only able to gain experience in weed science, but the agronomics and the integrated pest management components of all of these crops. We were responsible for the research trials from cultivation and planting through harvest.

“As a masters student, that brought on a large work load and responsibility, but it was awesome to be the first one seeing and doing the hands-on field work,” he said. “We also had ample opportunities to attend scientific conferences gaining writing, speaking and poster experience, networking with industry professionals throughout our time as graduate students. I also was able to publish all four data chapters of my thesis to scholarly journals.”

“I simply don’t believe there are any programs where a student can be exposed to as much as we were in two years I spent with Dr. Norsworthy,” he said.

“You have to have a high degree of organizational skill and, bluntly, have to be willing to work long hours just to do it that way — which Norsworthy does,” Bacon said. “Not many people reach that level of success without an awful lot of work.”