By Lynda Wilson
U Of A System Division of Agriculture
May 11, 2016

PINE BLUFF, Ark. – Evan Buckner, 16, a junior at Pine Bluff High School, won the Southeast Arkansas Regional Challenge and the Southwestern Arkansas State Science and Engineering Fair held at the University of Central Arkansas on April 1-2. Buckner was also the first Soybean Science Challenge winner in the Southeast region in 2015. 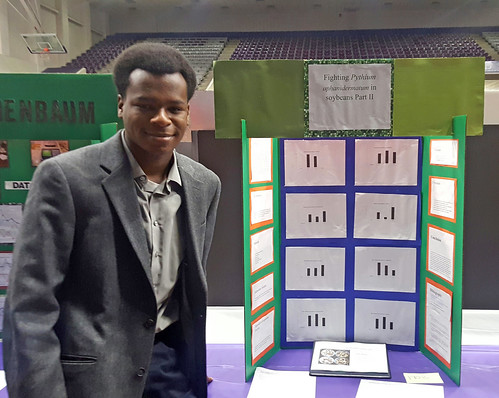 Buckner received a $300 cash award at the regional level and a $1,000 award at the state level. Both prizes were provided by the Arkansas Soybean Promotion Board. Buckner’s science project was based on his 2015 original research, testing two different soybean strains to see which would be more effective in fighting a common plant pathogen. His 2016 project, “Fighting Pythium aphidnerdermatum in Soybeans: Part II,” tested three chemical fungicides to see which one would show the most resistance to the plant pathogen.

Buckner’s completion of the online Soybean Science Challenge course made his project eligible for competition at the regional and state fairs. The part of the online course that helped Buckner was “the section that talked about the hundreds of farmers in Arkansas that depend on soybeans in their everyday lives,” he said.

Buckner said he was overwhelmed and thankful for both awards.

“When I heard my name called, I nearly ran down the aisle, forgetting that I was on crutches from a soccer injury,” he said. “I didn’t actually realize I had won the Southeast Arkansas Regional award until I returned to my seat and read through everything. I broke into a wide grin.”

“It’s truly amazing how this one seed can be used in things such as biofuel to tofu,” he said. “It’s a seed that will take us into the future.”

Buckner’s parents, Anissa and Edmund Buckner, said they “were surprised at first, but knew he deserved it. Evan’s hard work and interests in plant science are paying off.”

His mother said the recognition of his project was encouraging Buckner to study and work harder both academically and scientifically.

Buckner first started a garden club in junior high school, and has initiated a Garden Club at his high school with different plants and flowers.  He now takes care of the plot in between classes at school and on some weekends. Buckner and his assistant principal wrote a small community grant to help fund the plot. Faculty at Pine Bluff High School assist in sponsoring the club and provide materials, insight and do hands-on work with Buckner.

Buckner has a variety of interests and talents beyond his soybean research and general focus on the plant sciences. He enjoys playing the viola in his high school orchestra as well as the Arkansas Symphony Youth Orchestra.  He is a Boy Scout and on his high school soccer team.

On Buckner’s horizon for next year is more extensive work with soybeans, including field studies of the plant and other potential pathogens. He said he plans to compete again in the Southeast Arkansas Regional Science Fair and again at the state fair level if eligible.

The Arkansas Soybean Science Challenge was opened in January 2014 to 9-12 grade science students.  Students who successfully completed the online course were eligible to have their original soybean-related research projects judged at the 2016 ISEF affiliated Arkansas science and engineering fairs.