By Ryan McGeeney
U of A System Division of Agriculture
March 15, 2019 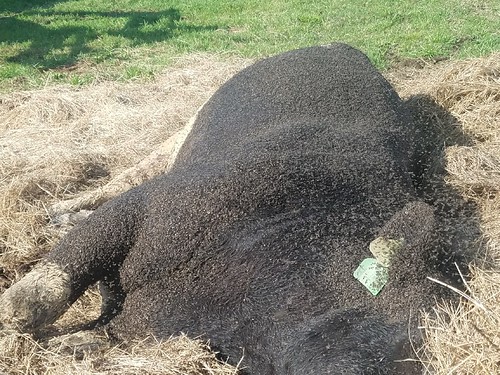 In 2018, such an outbreak, which lasted from about March 15 to about April 15, caused the death of about 100 domesticated animals and at least 280 deer in the area.

Kelly Loftin, extension entomologist for the University of Arkansas System Division of Agriculture, said spring flooding in the White River contributed to especially large populations of the southern buffalo gnat, a type of black fly that breeds in running water. He said that river levels are similar to those seen this same time last year, and current water temperatures are ideal for the insect’s reproduction.

“Water temperatures are in the high 50’s, low 60’s,” Loftin said, “which are prime breeding temperatures for the buffalo gnat. Comparing the river levels to a four-month period in 2018 during the outbreak, they’re very similar, if not a little higher this year.

“County agents in Arkansas County are encountering heavier populations of buffalo gnats than they see in most years,” he said. “However, it hasn’t reached the intensity that it reached in 2018.”

“I’ll be touring the county next week to see where buffalo gnat populations are intensifying,” Beckwith said. “In all likelihood, we’ll already be seeing some dead animals.”

Southern buffalo gnats, in large numbers, tend to kill animals in a number of ways, the most common of which is toxemia — specifically, a toxic reaction to the anticoagulants in the gnats’ salivary glands. They can also kill through sheer blood loss, known as exsanguination, or by suffocation, if an animal’s airway is blocked for a prolonged period of time.

Beckwith said he and other county agents have advised residents to alert Arkansas Game and Fish officials to any dead deer or other wildlife, in order to establish the best possible estimate of the insects’ effects on the area, and to update the Cooperative Extension Service office if any livestock or other domesticated animal appears to fall victim to the insects, in order to fully understand the outbreak’s economic impact.