By Dirk Philipp
U of A System Division of Agriculture
March 11, 2019

LITTLE ROCK — Perennial pastures usually take a lot of money and hard work to establish, but years of use can lead to various problems including overgrazing and weed infestations. But there are ways to freshen up your “out of shape” pastures. 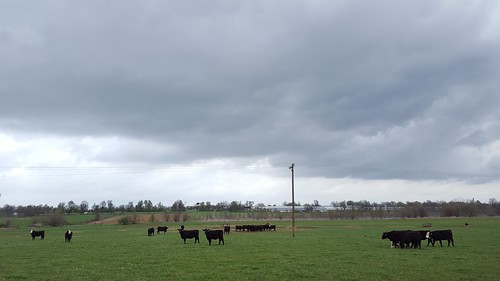 Tall fescue is a cool seasonal perennial, so it stays green most of the year in Arkansas, aside from the month of February and hot, dry summers. Full renovation of these pastures takes time and money, so if it’s an old KY31 fescue stand, converting it to novel endophyte is a good, albeit expensive, option. Switching between these varieties will take at least a year, given the required field preparation.

In novel endophyte stands, broadleaf weeds, annual ryegrass and other undesirables can encroach after several years of use. Pastures can be over-seeded with NE+ seeds in October. In this case, canopies should be very short (2-4 inches) in order to plant through the thatch with a no-till drill. The seeding rate should be close to the original rate — 15 pounds per acre or so.

Normally, over-seeding rates into existing forage stands are less than for the initial establishment of a stand, but often, gaps in pasture are large enough to warrant the normal seeding rates. A no-till drill in a must as it will cut through the existing grass sward (the surface layer of grass and roots) and place the seeds into the soil.

Orchard grass is an0ther perennial cool season grass, similar to tall fescue in growth habit, but much less persistent in Arkansas. Because it is non-toxic, stands that lose vigor can be over-seeded in fall, at a rate of about 15 pounds per acre.

Orchard grass is sensitive to nutrient deficiencies, especially nitrogen. Therefore, it is important to keep soil fertility in check at all times. Avoid extra nitrogen fertilizer at during over-seeding, but apply fertilizer in early spring for vigorous growth.

Since bermudagrass lies dormant between October and March, those pastures can be over-seeded with annual forages, such as winter cereals or legumes.

Most bermudagrass is established from sprigging, a method of seeding that involves planting stems cut from a mature bermudagrass stand. However, this cannot be done easily into existing stands, so the focus should be on weed avoidance and out-competing winter weeds with annual forages.

Dense, existing bermudagrass stands are very competitive, but areas that weeds carve out over time are the areas where over-seeding with animal forages works best. As in other cases, make sure the canopy is very short before planting.