STUTTGART — Arkansas continues to lay claim as the nation’s rice production leader, but agricultural researchers with the University of Arkansas System Division of are always working to improve the crop. 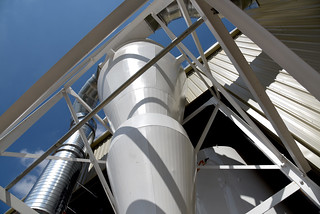 TOP SEED -- The University of Arkansas System Division of Agriculture's Foundation Seed Program, operated from this facility on the Rice Research and Extension Center near Stuttgart, assures pure, high quality foundation seed is available to seed growers and dealers for rice, soybean and wheat.

Division of Agriculture researchers recently developed a new variety of aromatic rice. It’s just one example of Arkansas striving to improve agriculture here, and in doing so, help feed the world.

The Arkansas Foundation Seed Program, based at the division’s Rice Research and Extension Center near Stuttgart, plays a key role in facilitating rice varietal development, making the enterprise more efficient and attractive to farmers.

“Our research and extension scientists train a lot of people to improve rice production practices not only here but around the world,” said program director Glenn Bathke.

“We view ourselves as a service organization. We provide seed at a low cost to seed dealers and make seed of new varieties available to be sure there is profit left for the farmers,” Bathke said.

Foundation seed is the purest seed stock produced from breeder seed under the Division of Agriculture’s control. Foundation seed is purchased by seed growers and used to produce certified seed that is sold for crop production.

Just last fall, a new long-grain aromatic rice variety called Aroma 17 was made available to the state’s rice growers after development at the Rice Research and Extension Center.

“It has much more of an aroma to it than conventional long grain or medium grain rice,” Bathke explained. “A lot of restaurants offer a selection of rice for people who like different tastes in rice. It has a jasmine aroma, similar to some Thai rice.”

Bathke said that once it’s clear that a new variety of rice is worth developing, he and his staff work to produce a high volume of the seed and make it available to seed growers and dealers.

“We’re continuing to learn how to operate the plant more effectively,” Bathke said. “We’re putting in all the fine tuning.”

“The growers really love them,” he said. “Medium grain varieties must go through commercial approval by the cereal companies, which are testing each variety before large-scale sales can go forward.”

The Foundation Seed Program’s work has played a significant role in feeding the planet.

Arkansas grows about half the rice grown in the U.S. and half of what the state produces is exported to other countries, Bathke said.

The primary goal of the program is to make seed of newly released and proven varieties available to all Arkansas growers as quickly as possible. The Division of Agriculture strives to place foundation-grade seed with seed growers who are committed to maximum production and maintaining the seed within the Seed Certification Program standards.

“Typically, the new varieties are better that the old ones in a number of ways, such as yield,” Bathke said. “Yield is important because that’s what the farmers get paid on. Agronomic features and cooking qualities are important considerations as well.”

The new Foundation Seed facility in Stuttgart replaced an older facility that dated back to the 1950’s.

The foundation seed developed by the Division of Agriculture is processed and managed in the state-of-the-art facility. The seed is inspected throughout the process, from the field to the point of sale, to ensure high quality and purity, Bathke said.

To learn more about foundation seed varieties available through the Division of Agriculture, visit http://foundation-seed.uark.edu/default.aspx.

By Seth Blomely
U of A System Division of Agriculture