Switchgrass may offer potential for native grass in pastures

Switchgrass may offer potential for native grass in pastures

FAYETTEVILLE, Ark. — The unrealized promise of a biomass industry aside, switchgrass offers many advantages for land owners thinking about adding a native grass to their pastures, said Dirk Philipp, forage researcher and associate professor of animal science for the University of Arkansas System Division of Agriculture. 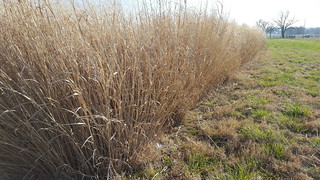 NATIVE GRASS -- Switchgrass has many advantages for land owners who consider adding a native grass to their properties.

Switchgrass is adapted to a wide range of environmental conditions, Philipp said. Once established, it persists very well and out-competes other grasses and broadleaf plants.

It tolerates wet areas, Philipp said, and it doesn’t take up a lot of nitrogen. That means nitrogen fertilizer rates can be kept low.

Philipp said switchgrass can be used in a wide range of settings. It can supplement grazing during late spring and early summer. It is well suited for planting along property lines and in marginal areas of the farm where other forages are difficult to establish. It’s also a good choice for use along intermittent streams.

It creates an understory that is open enough to permit travel by wildlife, including birds and mammals, Philipp said. Crown development in plantings over the years leave those travel corridors open permanently.

Landowners who consider adding switchgrass to their properties should check with their county Extension Office before beginning. “This is a good idea for several reasons,” Philipp said.

The Cooperative Extension Service can help develop a plan for where and when switchgrass should be planted, Philipp said. He added that it’s important to make sure it fits longterm farm business plans and to investigate cost-sharing and other external funding and support sources.

“Landowners should understand that switchgrass establishment is a longterm commitment and that it’s time-intensive,” Philipp said.

“But once established,” Philipp said, “switchgrass plantings will serve their purpose for decades to come,”

Media Contact: Fred Miller
Communication Services
U of A Division of Agriculture
(479) 575-5647
fmiller@uark.edu