FAYETTEVILLE, Ark. — The optimum window for weed control in bermudagrass pastures is January through March, but if you’ve missed that window, there are options available. 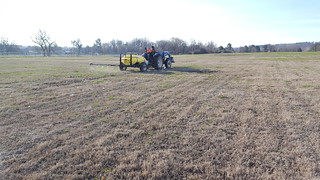 HIGH TIME -- Spring is high time to tackle weed control in bermudagrass pastures. But there are options for those who miss the window.

Dirk Philipp, associate professor of animal science and forage researcher for the University of Arkansas System Division of Agriculture, said bermudagrass begins to green up between March and April, depending on its location in the state. “So January through March is high time to tackle weed control,” he said.

Common early-season weeds in Arkansas include henbit, plantain, buttercup and some grassy weeds like little barley and annual ryegrass.

Weeds in dormant bermudagrass pasture can be controlled with glyphosate, Philipp said, though glyphosate is not as effective with some weeds. These include henbit and plantain.

“These need to be controlled with a 2, 4-D related product,” Philipp said.

Some herbicides can be mixed together to increase effectiveness, Philipp said. “Check the labels thoroughly to make sure there are no restrictions,” he said.

Philipp added that surfactants should also be added to the mix so herbicides stick to the waxy surfaces on the leaves of some weeds.

Philipp said producers who miss the early weed control will have later opportunities:

In the longterm, Philipp said, producers should try to be consistent with weed control.

“Try to set aside time very early in the year to apply glyphosate while bermudagrass is dormant,” Philipp said.

“Our experience has shown that two years of consistent herbicide application will clean up most weeds,” Philipp said. “Follow up early application with targeted applications to address specific weeds.”

Media Contact: Fred Miller
Communication Services
U of A Division of Agriculture
(479) 575-5647
fmiller@uark.edu