LITTLE ROCK – Rice is expected to pick up 170,000 acres for the 2018 growing season in Arkansas, but continued rain here and drought in South America may shift that forecast in favor of soybeans, say extension agronomists and an economist for the University of Arkansas System Division of Agriculture.

The National Agricultural Statistics Service issued its “Prospective Plantings” report on Thursday, its acreage forecast based on surveys of growers in Arkansas. 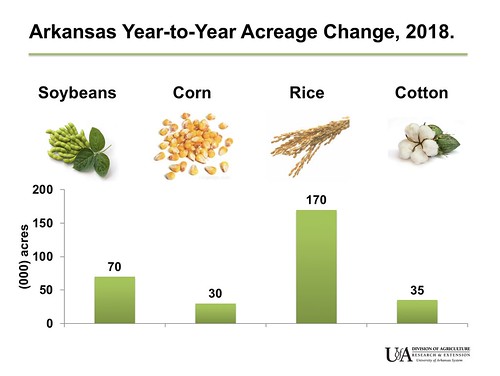 Arkansas Year over Year acreage change. (U of A System Division of Agriculture image by Scott Stiles)

Over the last three weeks, Arkansas has seen heavy rain; with parts of southeastern Arkansas seeing an estimated 5 inches or more since Monday. Meanwhile, Argentina, the world’s top soybean meal exporter and No. 3 producer, is enduring its most severe drought in 40 years.

“Ahead of today's report, I think it was pretty easy to call soybeans, cotton, and rice acres higher in 2018,” said Scott Stiles, extension economist for the Division of Agriculture. “Prices for all three of those crops have been higher year-to-date compared to last year.”

“Anticipated corn acres are nearly the same as last year and the final acres will ultimately depend on the weather over the next few weeks, as current wet weather is delaying planting,” said Jason Kelley, extension wheat and feed grains agronomist. “The increase in corn prices the last few weeks has helped increase acre intentions compared to earlier in the winter.”

Stiles said he was surprised by the increase in corn acres. 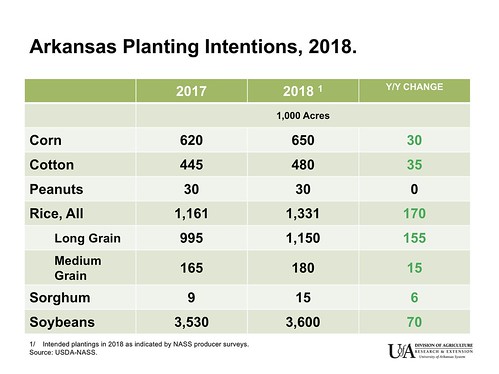 Arkansas Planting Intentions chart. (U of A System Division of Agriculture image by Scott Stiles).

“In March we did see new crop corn futures trade above $4, but I thought that run-up in price was a little late to influence planting decisions,” he said. “Besides, soybean and cotton prices were strong too. But, similar to soybeans the South American weather problems have supported the corn market.

“Over the last 10 weeks the U.S. export market for corn has really caught fire,” Stiles said. “The fundamental outlook for corn has begun to improve on better demand and prospects of U.S. corn acres being down this year.

“A lot of times the previous year's yield experience will have an influence on planting decisions,” he said. “Here again, we had strong corn yields in the state last year; the third-best on record with some great yields down in the south half of the state. When all factors went in the blender, we picked up a few corn acres.”

Bill Robertson, extension cotton agronomist for the Division of Agriculture, said he expects the actual acreage to be higher.

“I’ve visited with agents in places where there hasn’t been cotton in a while” such as Little River County, Robertson said. “There’s a grower there that’s planting everything into cotton. Not beans not corn. There used to be cotton there a long time ago.

Robertson said with corn hovering around $3.75, “that’s not something to be too excited about. Cotton is looking pretty decent.”

“We had a state record yield of 1205 pounds in 2017. Couple that with prices approaching 80 cents and cotton becomes a competitor versus $10 soybeans,” he said. “Very strong export demand has continued to support cotton prices so far this year.”

Arkansas peanuts, whose acreage has grown over the last few year, are expected to hold steady at 30,000 acres.

“We came off a record high year of 5,040 pounds per acre across the state, which was the highest among all peanut producing states,” said Travis Faske, extension plant pathologist who also serves as the peanut agronomist. “Though the generic cotton base revision has some states predicting fewer acres in 2018, this revision has not had a major impact in the interest of peanut production in Arkansas.”

NASS put Arkansas rice acres at 1.331 million acres for the 2018 season, with most of that growth, 155,000 acres, in long grain. Arkansas is the nation’s largest rice producing state.

“Total rice came in right where I thought the estimates would fall,” said Jarrod Hardke, extension rice agronomist for the Division of Agriculture. “I’m still thinking more like 1.4 million acres total for the moment with most of that difference in higher medium grain acres.

“Unless rains push us extremely late, our early rice intended acres won’t change much,” Hardke said, adding “a progressive soybean price increase may entice growers to switch some acres as they sit around watching it rain.”

Weather-induced prevented planting – to the tune of almost 220,000 acres last year, “led to a much tighter balance sheet for the 2017-18 marketing year,” Stiles said. “Price-wise, new crop futures have averaged about 76 cents per bushel higher during the first quarter of 2018 compared to last year.

“In terms of added revenue, that is a significant increase when you multiply that simply on last year's average long-grain yield of 167 bushels per acre,” he said. “The rice market has asked growers to plant more and they responded in kind -- but maybe not as much as we anticipated.”

“Grain sorghum acres are up slightly, but still at near record-low levels due to the threat of sugarcane aphid and overall perceived lack of profit potential,” Kelley said.

Stiles said the “threat of China curtailing its purchases of U.S. sorghum has probably added some concern about export demand long-term.”

Soybeans were expected to gain 70,000 acres in Arkansas in 2018, growing to 3.6 million acres. No surprises, said Jeremy Ross, extension soybean agronomist for the Division of Agriculture.

“On the soybean acreage, I was anticipating similar acreage that was planted in 2017,” he said.  “This was reflected in the intentions report. We could see some gains in soybean acreage if we continue to see rainy weather patterns over the next four weeks.”

Ross said that soybean planting has started on limited acreage and he expected “it will pick up as soon as it dries up.”

Considering Argentina’s drought, “the U.S. Department of Agriculture projected Argentine soybean production would be down almost 400 million bushels from last year,” he said. “That has offered much of the support to soybean prices.”

For more information about crop production in Arkansas, visit www.uaex.edu or contact your county extension office.