FAYETTEVILLE, Ark. — Leandro Mozzoni returned to the University of Arkansas System Division of Agriculture with the goal of accelerating the Arkansas soybean breeding program.

“Coming from the private sector, I have a focus toward developing products,” Mozzoni said. “I want to get new varieties in the hands of Arkansas growers.”

“The Division of Agriculture is committed to providing support to Arkansas’ producers and agricultural industries through research based discovery, knowledge and new technologies,” said Mark Cochran, vice president for agriculture for the University of Arkansas System. “Leandro’s background in the division’s soybean breeding program and accomplishments in the private sector make him uniquely qualified to advance the division’s land grant university missions.” 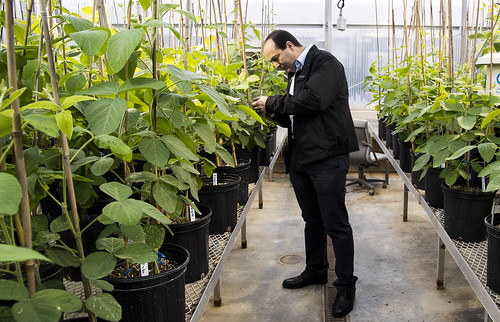 Leandro Mozzoni makes new breeding crosses in a greenhouse. It is one of the new methods he is using to accelerate development of improved soybean varieties. ( U of A System Division of Agriculture photo by Fred Miller.)

Mozzoni, a native of Pergamino, Argentina, earned his bachelor’s degree in agronomy at Rosario National University in Argentina. He earned his master’s degree and Ph.D. at the University of Arkansas, both in crop, soil and environmental sciences with emphasis in soybean breeding and genetics.

During his graduate school career, Mozzoni worked as a research assistant to crop breeder Pengyin Chen in the Division of Agriculture’s soybean breeding program.

After completing his degrees, Mozzoni went to work for Monsanto Company from 2009 until joining the division in September, 2017. He established a soybean breeding program for the company in Nebraska, building it from the ground up. His work included selecting germplasm stock and establishing a testing network to support development of maturity group 2 and 3 soybeans adapted to the Midwest.

His efforts led to the release and patenting of 16 new soybean varieties.

Mozzoni’s goals for the Division of Agriculture soybean breeding program is three-pronged. The first prong is development of new soybean varieties for Arkansas growers.

Mozzoni said his core efforts will be to continue the division’s emphasis on developing new commodity soybean varieties. He also wants to continue the work Chen began on food type soybeans — edamame, natto and tofu.

“The Division of Agriculture’s breeding program has a strong foundation built by Dr. Chen,” Mozzoni said. “We have a lot of pure, conventional germplasm and unique genetic breeding material.”

The division’s soybean breeding program has a solid foundation of maturity group 5 varieties already released and breeding selections that are in the pipeline moving toward commercial release, Mozzoni said.

Mozzoni is taking steps to accelerate variety development, especially in maturity group 4. He is using research nurseries in Chile to grow generations of soybean selections during Arkansas’ winter months. “I can cut two years off the timeline for developing new varieties by using the nurseries in Chile,” Mozzoni said.

Once an advanced selection has proven potential as a variety, Mozzoni said, it will be tested for adaptation, yield potential and other traits in Arkansas nurseries.

Mozzoni said he can shave  another six months off the timeline by making new crosses in the winter in Arkansas Agricultural Experiment Station greenhouses instead of waiting for plants to grow to reproductive stages in outdoor breeding plots.

“We want to do quality research,” Mozzoni said, “but at the end of the day, we want to get new soybean varieties out and identify markets for them.”

Mozzoni’s second prong is to advance the science of crop breeding. He has already begun by moving toward meeting a budding demand for maturity group 4 soybeans in Arkansas.

Right now, he said, the Arkansas program is split roughly 70 percent maturity group 5 varieties to 30 percent group fours. His goal is to gradually reverse that ratio.

“The industry has moved toward maturity group 4 in Arkansas,” Mozzoni said. “We have an opportunity and a challenge to build a group 4 program.”

Mozzoni said he is seeking available group 4 germplasm sources from public breeding programs in other states, and is watching for opportunities to work with commercial companies willing to share breeding material.

Mozzoni is also working with other Division of Agriculture scientists who are developing advanced technology that will accelerate conventional plant breeding and improve efficiency in identifying desirable traits and move them into improved varieties.

Division researchers in plant pathology, crop physiology and other disciplines have been working to identify genetic markers for such traits as yields, drought tolerance and disease resistance, Mozzoni said. The presence of such markers can identify those qualities in seedlings, allowing selections to be made much earlier, he said.

An entire wall in Mozzoni’s office is lined with bookshelves stuffed with records of soybean germplasm records going back to 1949 and breeding trials going back to 1946. Searching those printed records for potentially advantageous breeding stock is a daunting task.

“It’s a longterm goal,” Mozzoni said, “But I would like to convert those books into a searchable, digital database.”

The final prong in Mozzoni’s game plan is to train and mentor the next generation of crop scientists.

Graduate students in Dale Bumpers College of Agricultural, Food and Life Sciences become scientists through hands-on experience that contributes to Division of Agriculture research, Mozzoni said. He and many other division researchers serve as graduate advisors and mentors to students who actually do much of of the work in Agricultural Experiment Station labs and research plots.

That is, after all, how Mozzoni got here.

Media Contact: Fred Miller
U of A System Division of Agriculture
fmiller@uark.edu