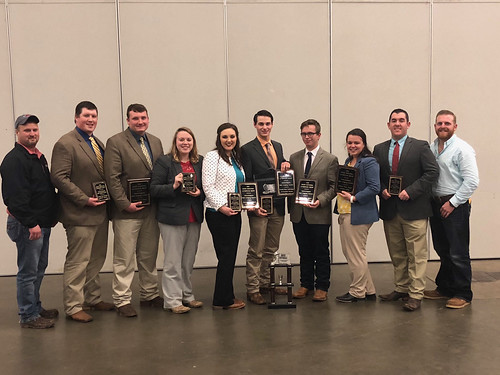 (Newsrooms: With downloadable art at https://flic.kr/p/F9x7rx )

Bryan Kutz, instructor-Animal Science, with the University of Arkansas System Division of Agriculture, said the students’ high performances gelled in a short time. He started coaching the team in December; they earned their reserve championship Feb.10.

“I am extremely proud of the team,” Kutz said. “It’s nice when all the team members come together and place consistently with each other. They all contributed and realized their potential. I hope this will help boost confidence going forward to future competitions.”

Besides being named the Reserve Champion Team Overall, Arkansas was first place in the Continental Division, second in the Steer and English cattle division, third in reasons and fourth in the Brahman Division.

Michael McFarland of Locust Grove, Oklahoma, led the team, winning ninth high individual overall. McFarland was also second in Continental and fourth in English. Bailey Corwine of Pomona, Kansas; was fifth in steers and eighth in Continental. Zane Blubaugh of Tonkawa, Oklahoma, was 10th overall and ninth in Brahman. Ted Chambers of LaCygne, Kansas, was seventh in English. Jordan Volkman of Bourbon, Missouri, was fifth in Continental and Lacy Barrett of Gravette, Arkansas, was eight in the Steers class.

Arkansas’ McClung Honored
The Dixie National Show recognized the late Adam McClung, former executive vice president of the Arkansas Cattlemen’s’ Association and a major supporter of the event, by giving a memorial award in his name to the high point individual. McClung graduated from Greenbrier High and went to Eastern Oklahoma State College and Oklahoma State University on livestock judging scholarships.