By Ryan McGeeney
U of A System Division of Agriculture
March 2, 2018

BATESVILLE, Ark. – Anyone who’s ever taken the 4H pledge knows the value — and the pervasiveness — of community service projects. The very fabric of the organization is woven by strengthening surrounding communities through involvement, good works and sincere efforts. And while most 4H community service projects last a few months to a single school year, others unfold over a much longer period of time 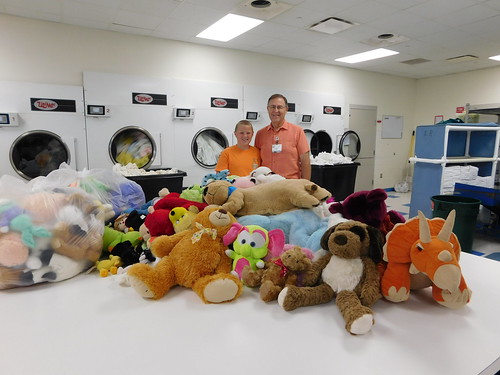 For Daniel Latus, 13, his community service project has the potential to carry on through his high school graduation.

Daniel’s mother, Linda Latus, is an Independence County 4H program associate. She said that when Daniel learned about the practice of a local hospital chaplain — D.L. “Doc” Spurlin —giving stuffed animals to patients at the White River Medical Center in Batesville, he decided it would be a perfect fit for him.

“They have a need for small stuffed animals to give out to patients in the ICU, the blood lab, and in the emergency room,” Latus said.

Daniel first learned about the use of stuffed animals to cheer hospital patients from his father, George Latus, who manages the hospital's laundry services, where donated stuffed animals are first washed before they’re given out to patients.

Latus said Daniel began collecting the stuffed animals in Batesville and throught the surrounding county about six months ago. After a short article about his project appeared in a local newspaper appeared, donations grew exponentially. His current count is about 400, Latus said.

“We’ve got people bringing them to the Cooperative Extension Service Office, and other people donating to their local 4H clubs throughout the county, who in turn donate them to us,” Latus said.

In addition to collecting the donated toys from others, Daniel also keeps an eye open in local thrift stores for good-quality stuffed animals he can purchase and donate himself.

Latus said that she and Daniel occasionally meet people who have received one of the donated stuffed animals during a visit to the hospital, which has helped make the endeavor feel all the more rewarding.

Latus said that Daniel plans to continue the project until he graduates high school in about five years, and that he hopes to begin expanding the donations to medical clinics throughout Independence County.