MONTICELLO, Ark. – You can’t celebrate the International Year of Soils without getting your hands dirty. No one knows that better than members of the nearly two dozen teams that will compete in the national soil judging contest hosted by the University of Arkansas at Monticello April 19-24. 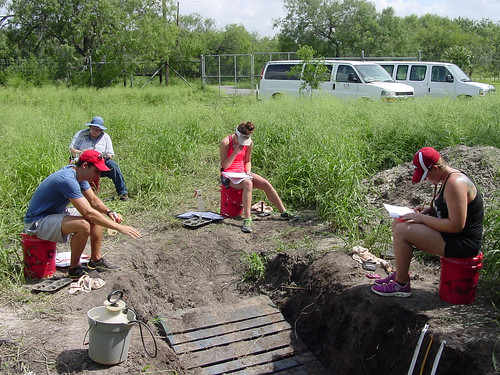 The national soil judging contest is hosted by the American Society of Agronomy and the Soil Science Society of America. Contestants examine various soil pits and are expected to correctly identify, evaluate, classify and describe four soil profiles.

The International Year of Soils declaration by the United Nations is meant to increase awareness and understanding of the importance of soil for food security and essential ecosystem functions.

“We will have 22 teams from California to Rhode Island and places in between,” said Paul Francis, professor of agriculture at the University of Arkansas at Monticello. “Most of the students have never been to Arkansas and we are going to take the opportunity to showcase Arkansas and Arkansas agriculture with our soils.”

Francis said Stuttgart-based Riceland Foods would provide students with samples of Arkansas-grown rice to take home. Participants will also have the chance to visit the bank of the Mississippi River on one of the practice site routes.

Defending champion Virginia Tech is expected to return this year. The team won the national contest in 2012, 2010 and 2005.

The University of Arkansas soil judging team will also be competing. The team comes to the competition having won regionals in 2011 and 2012 and 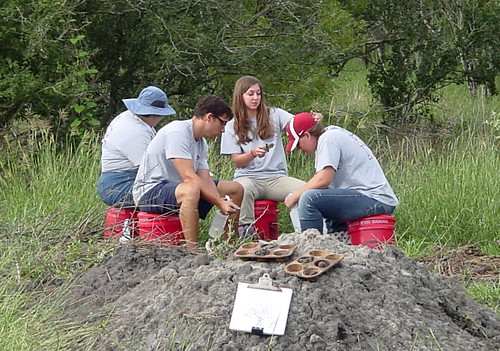 THINKING IT THROUGH - Left to right, members of the University of Arkansas Soils Judging team are Lynnette “Dave” Smith, Johan Desrochers, Julia Allen, and Brandy January. We were northeast of the Kingsville, Texas, during the 2014 regional competition. (U of A System Division of Agriculture photo by Kristofor Brye)

Kristofor Brye, professor-applied soil physics and pedology for the University of Arkansas System Division of Agriculture, said there’s no home field advantage in this competition.

“Northwest Arkansas, which we know well, is very different than southeast Arkansas. The week of practice leading up to the actual competition will be really helpful and meaningful for us to calibrate to all the little details we need to be familiar with,” he said. The nationals “will be challenging for all teams participating for a number of reasons, but there are many very good and well-trained teams that will be coming to participate.

“Regardless, it will be an extraordinary learning experience for my students, many of which will be graduating before being able to soil judge again after this National Contest,” Brye said.

For this contest, each school fields a four-member team. Each team member judges three soil pits independently, then the group judges two pits as a team. Contestants will look at properties such as texture, structure, permeability, depth, slope, and runoff. The contestants then make interpretations of the soil behavior according to characteristics.

The top four individuals will be invited to represent the U.S. in the international soil judging competition in Hungary in September.

As with any event of national scope, there’s a lot of elbow grease that goes into hosting – and with such tough going, organizers will have to dig deep.

“We’ll excavate five contest pits and approximately 16 practice pits for the students to study prior to the contests,” Francis said.