LITTLE ROCK — The falling market price for cotton is compelling dozens of long-time cotton farmers in the northeastern area of the state to consider growing peanuts in their stead, several agricultural experts said this week.

Travis Faske, a plant pathologist with the Cooperative Extension Service in Lonoke and the University of Arkansas System Division of Agriculture’s resident peanut expert said between 40 and 50 growers from the state’s northeastern corner met on March 23 in Manila for what will probably be the state’s only peanut production meeting in 2015. 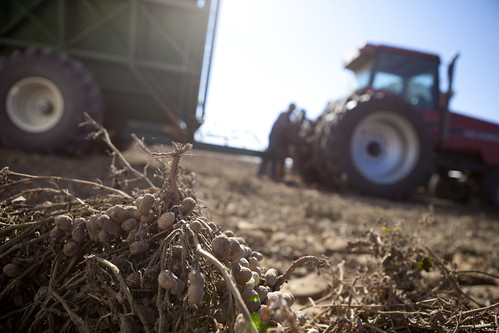 “With the cotton prices being what they are, a lot of these guys are looking for something else to plant this year, and peanuts are attractive to them,” Faske said.

“The goal of this meeting was to give potential growers a realistic idea of what it is to produce peanuts, from the time you put the seed in the ground until you harvest. We just gave them some of the basic information,” Faske said. He said about 40 percent of the growers attending the March 23 meeting in Mississippi County indicated they were serious about planting peanuts for the first time.

Ray Benson, the agricultural chair for the Mississippi County Cooperative Extension Service office, said the county is likely in for a significant increase in its per-capita peanut production.

“As far as I can tell, the last two or three years, we’ve had one grower, who has maybe 300 of acres of peanuts a year,” Benson said. “I won’t be surprised if, after planting this year, this county’s one of the biggest peanut growers in the state.”

Like several nearby counties already known for their peanut production, including Randolph and Lawrence counties, parts of Mississippi County are well-suited for peanut production with sand and sandy-loam soils. Peanuts are also considered an excellent rotation crop for cotton growers, Benson said, which leaves the option of returning to cotton in the future open.

Benson said the March 23 meeting was actually requested by area growers who expressed interest in entering the market.

“I think that peanuts are looked at as a ‘best-available option’ right now,” he said. “There’s always been a historical connection with cotton for many of the farmers up here. Many of their farms, their livelihoods, until very recently, have all been related to cotton production.”

“It’s a feeling that they’re having to get out of their comfort zones,” Benson said. “But that sort of transition took place a few years ago, too, when they were able to grow corn. Three or four years ago, corn became a good economic option, and it helped them realize that we can grow things other than cotton. So that may have made it a little easier for them to look for a different crop now.”

Arkansas was first designated a major peanut-producing state by the National Peanut Board in 2014. According to data from the board, approximately 21,600 tons of peanuts were inspected in Arkansas in 2014. Most of the peanuts produced in Arkansas are “runner” peanuts, which are used in peanut butter.

The typical planting window is similar to cotton, with an optimal window in April and May, and an October-November harvest, Faske said. But that’s where the similarities end.

“Both planting and harvesting peanuts is a slower process than a lot of our growers are used to,” Scott said. “Peanuts are more like a vegetable than a row crop. The seed is easily broken during the planting process, so you have to go a little bit slower. You have to dig them out of the ground, and one combine can harvest about 30 acres of peanuts a day. It tends to drag out harvest a little bit.”

Both the planting and harvesting of peanuts requires dedicated equipment, including special planter plates, a digger and a special threshing machine — a capital layout that can reach into the hundreds of thousands of dollars, Scott said, “Depending on how big they want to be.”

“Some of the growers there had already purchased two or three pieces of this equipment in anticipation of growing peanuts this year,” Scott said. “It’s a whole new investment.”

“Weed control in peanuts is essentially like weed control in conventional soybeans,” Scott said. “They’re non-GMO crops, so there’s no Roundup, no Liberty, nothing like that we can use over the top. With our problem with resistant pigweed that we have, it makes weed control more problematic for some of these guys.”

Scott said that successful weed control in peanuts — especially for Palmer Amaranth, commonly known as pigweed — begins 15-20 days before planting, when growers should use overlapping applications of residual herbicides, continuing until about 60 days after planting.

“They’ve got to control pigweed before it ever comes up,” Scott said. “We don’t have a really good post-emergence option for pigweed if it makes it through our residual programs.”

Gregory Baltz, a Randloph County peanut farmer and vice president of the Arkansas Peanut Growers Association, said peanuts offer cotton farmers a good opportunity to convert their generic cotton base acreage to something that offers a greater safety net under the 2014 Farm Bill. The federal program, which vastly reduces direct subsidy payments in lieu of greater dependence on forms of crop insurance, has forced growers throughout the country to weigh the benefits and risks of one crop against another as the March 31 deadline for reallocating acres and updating projected yields under the program approaches.

“There are opportunities for cotton farmers who have a generic cotton base,” Baltz said.

“That’s part of the reason I see interest in peanuts along the eastern edge of Arkansas where the cotton production is.”

Baltz said the peanut market tends to foster more cooperation between growers and buyers like Golden and Birdsong, the two major purchasers in Arkansas. Growers typically contract with buyers at the beginning of the season for an agreed-upon price, and buyers supply seed, as well as guaranteeing delivery, drying and storage.

While the return on investment in peanuts may be more attractive than cotton at the moment, the legumes are still as susceptible to market forces as other crop. Market prices for peanuts have declined over the last few years, as more producers enter the market and accumulate a peanut surplus. Baltz said the contract price for peanuts has fallen by nearly half over the past four years, from $700-$750 a ton in 2012 to about $400 in 2015.

“Several years ago, the market price was really high,” Faske said. “But given that the shellers are still shelling 2012 or 2013 peanuts — 2014 are still in the warehouse — there’s a surplus supply. And when supply’s high, the price is oftentimes low toward the end of the season. So, that’s risky.”

For more information about crop production, contact your county extension office or visit www.uaex.edu or http://Arkansascrops.com.