MONTICELLO, Ark. -- Research radishes at the Southeast Research and Extension Center have found that the only way to grow is up.

Trent Roberts, soil scientist with the University of Arkansas System's Division of Agriculture, said that the root vegetables' usual downward growth habit lends to their promotion as a tool to reduce soil compaction and cut the need for deep tillage in crop land. 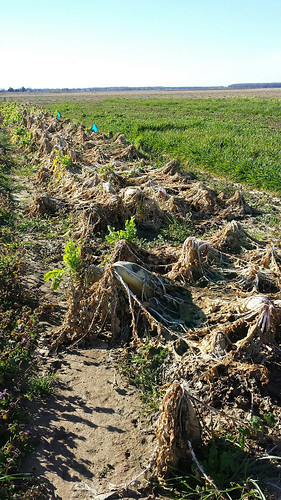 Wide shot of tillage radishes showing their above-ground growth due to heavy soils at the Southeast Research and Extension Center in Monticello, Arkansas. (U of A System Division of Agriculture photo by Trent Roberts)

"Unfortunately for these tillage radish, our soils -- heavy textured and poorly draining -- did not allow them to root down or drill through the plow pan or restrictive layers like they do in the upper Midwest," he said. "A lot of producers who have attempted to use tillage radish have only seen the deep rooting on very sandy soils, where compaction is not always a major concern."

At SEREC, the soil was so dense, even the largest 6- to 8- inch long and 3-inch wide radishes surrendered, growing tubers above ground. While not so good for tillage, Roberts said the vegetables still hold promise: "I think tillage radish have a place in Arkansas as a winter cover crop, but I see them playing a completely different role.”

Nutrient sponges
"Tillage radish are amazing at nutrient scavenging and nutrient retention," he said. "The great thing about tillage radish is that their large tubers soak up nutrients like a sponge and hold on to them during our winter months that are often very wet and would result in a high level of leaching and ultimately nutrient loss."

Those absorbed nutrients that are released very quickly and are readily available for whatever crop is being planted in the spring.

"I think we could get some huge benefits from the radishes from a nutrient retention standpoint rather than compaction alleviation," Roberts said.

The tillage radishes are part of a larger winter cover crop study funded by the Arkansas Soybean Promotion Board. Roberts said the study is looking at the influence of planting date and nitrogen fertilizer rates on radish establishment and what effect that might have on soybean growth the following season. In addition to SEREC, the cover crop trials are being conducted at Division of Agriculture’s Pine Tree Research Station at Colt, the Rice Research and Extension Center in Stuttgart and the Vegetable Research Station at Kibler. 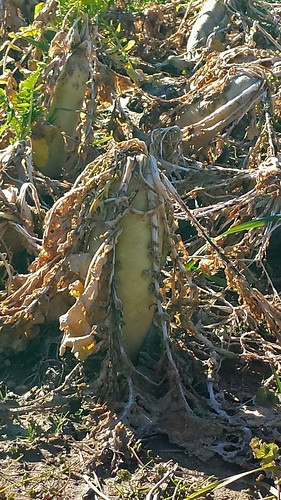 Tight shot of tillage radishes showing their above-ground growth due to heavy soils at the Southeast Research and Extension Center in Monticello, Arkansas. (U of A System Division of Agriculture photo by Trent Roberts)