U of A System Division of Ag dedicates boardroom to Welch 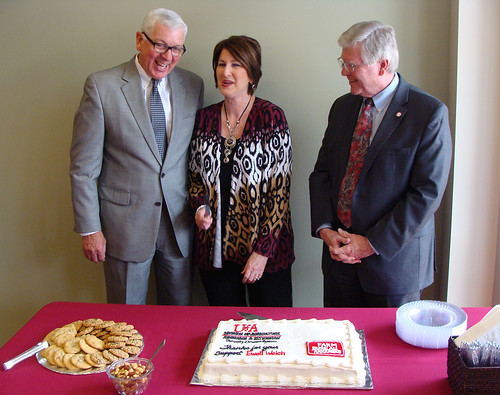 The high-tech meeting room is located in the renovated annex of the University of Arkansas Cooperative Extension Service building on South University in Little Rock.

“We certainly wanted, in the Division of Agriculture, to express our appreciation to Ewell Welch and all of the things that he has contributed, not only to our organization, but really, to the state of Arkansas and to agriculture within the state,” said Mark Cochran, University of Arkansas Vice President for Agriculture. “Ewell has been a tireless supporter of all of our programs.”

Welch and his wife, Deanna, flanked a plaque with Welch’s image that will be hung in the conference room. The plaque reads: “In recognition for years of service to the Division of Agriculture, Cooperative Extension Service, 4-H and Arkansas Agriculture.”

“I’m very humbled and honored to be recognized in this way,” Welch said. “As I’ve said before in my career at Farm Bureau to be given the freedom and the opportunity extensively to work with the folks within the U of A Division of Ag and really, it’s been one of the highlights of my career.”

Welch has spent his professional life in agriculture. He earned a bachelor’s in plant pathology and a minor in agricultural business. He also earned a master’s in agricultural economics  -- both degrees coming from the University of Arkansas.

His first job out of school was with the Arkansas Farm Bureau, which hired Welch to be part of its poultry division. He began work there in December 1977 and Welch never looked back, serving at Farm Bureau for 36 years.

In 2002, he interviewed for the position of executive vice president -- a job he retired from in 2013.

For more information about the Cooperative Extension Service and its programs, contact your county extension office or visit our newly renovated site, www.uaex.edu.