By Mary Hightower
U of A System Division of Agriculture
June 14, 2019

FAYETTEVILLE, Ark. – Jeyam Subbiah, the new food science department head, isn’t going to be sitting still much in the next few weeks and months.

Subbiah comes to Arkansas from the University of Nebraska-Lincoln, where he was Kenneth E. Morrison Distinguished Professor of Food Engineering in the departments of food science and technology and biological systems engineering. 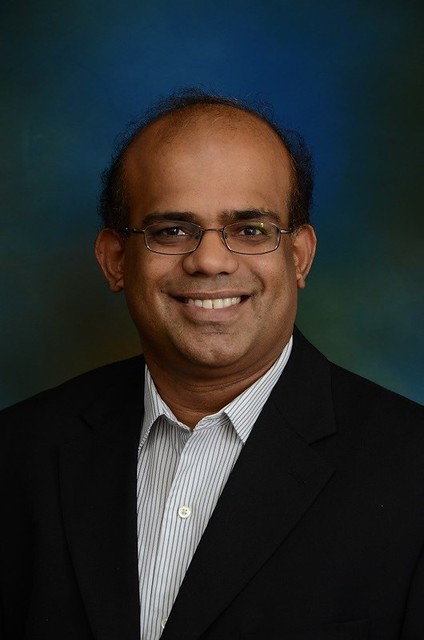 As department head in Arkansas, he will be part of both the Arkansas Agricultural Experiment Station, the research arm of the University of Arkansas System Division of Agriculture, as well as the university’s Bumpers College of Agricultural, Food and Life Sciences. Subbiah also has an extension appointment, covering the three land grant missions.

“We are extremely fortunate to hire someone of Dr. Subbiah’s caliber to lead our food science program,” said Jean-Francois Meullenet, associate vice president-agriculture and head of the Experiment Station for the Division of Agriculture. “We look forward to working with Jeyam to further advance the national prominence of the department.”

Subbiah will lead a department already ranked among the top five food science departments  in the nation. Even so, he sees room for growth.

Subbiah said that, “this summer, I will basically spend time learning about the department and how things work here; meeting people individually and in small groups to understand the lay of the land.”

Come fall, he plans to gather the faculty in a retreat to review where the department has been and “define the challenges and the opportunities.”

Among his goals for the department are to increase student enrollment, the amount of grants and other extramural funding, as well as the number of faculty in the department.

Subbiah said there were several factors that attracted him to Arkansas. Rice was one of them.

One “thing that attracted me is the rice processing program here in Arkansas,” he said. The Rice Processing program, led by Terry Siebenmorgen, a distinguished professor in the food science department, is known around the globe for its innovation and foresight in helping improve one of the world’s most commonly consumed staples.

“I’m originally from south India. We still eat rice quite a bit,” he said, adding that one of his undergraduate mentors is now deputy director general of the Indian Council of Agriculture Research “Since rice is an important commodity in India, and Arkansas is well known for its rice processing program, I could help in building some international collaboration in India.”

Collaboration is a key theme in Subbiah’s work.

The nearness of Tyson and Walmart “are huge opportunities,” he said. Subbiah’s previous research in beef tenderness had already led him to work with Tyson.

He is also eyeing collaborative opportunities with the department of biological and agricultural engineering, headed by Lalit Verma, a longtime colleague of Subbiah’s in engineering; and in horticulture, led by Wayne Mackay. Mackay served as interim head for food science, was able to give Subbiah a strong entrée into his new job.

Subbiah said there was another factor too – quality of place. He and his wife, Latha, did not want to live in a big city on either coast, but wanted to live in a place small enough to be comfortable, but big enough where she could find work as a programmer. They have two children, Vishal, 15, and Roja, 11.

Another goal – which is just weeks away – is to collaborate with the University of Nebraska, Georgia Tech and Navajo Tech in submitting a National Science Foundation Engineering Research Center proposal for transforming food manufacturing in the United States. If successful, the proposal could mean some $26 million over five years, which can be renewed for another five years.

“This cuts across the Division of Agriculture and the Fayetteville campus and I am excited to collaborate with faculty both from the College of Engineering and the Division,” he said, of the proposal, which is due in July.

To learn more about the Food Science program at the University of Arkansas, visit https://food-science.uark.edu/.