FAYETTEVILLE — Golf course shade trees may be welcomed by Arkansas golfers, but they’re sub-PAR on the putting greens. 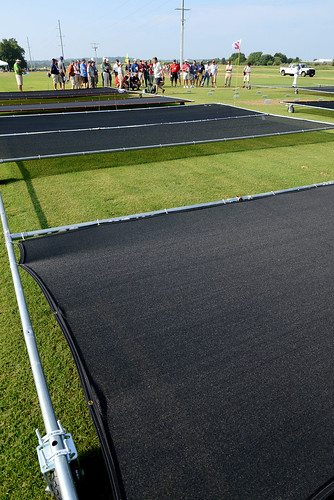 PAR stands for photosynthetically active radiation, said Travis Russell, graduate research assistant in the department of horticulture for the University of Arkansas System Division of Agriculture and the U of A Dale Bumpers College of Agricultural, Food and Life Sciences.

“PAR is a bandwidth within the visible light spectrum, from 400 to 700 nanometers, that plants use to complete the photosynthesis process,” Russell said.

Insufficient levels of PAR, when light is reduced or blocked by the shade beneath trees, can compromise the ability of turfgrass to photosynthesize energy in the form of carbohydrates, he said.

The result is a tendency by the grass to expend its limited energy growing vertically, looking for light, but not horizontally, Russell said. Turfgrass with elongated stems and extended leaves is less healthy than plants that spread horizontally, is more susceptible to mower scalping and decreased density on lawns, fairways or greens.

Shade on a golf course comes from many sources, Russell said. Trees, the most obvious offender — from the turf’s point of view — add aesthetic value to the course and may influence how some holes are played. Buildings and other unalterable objects also cast shadows, he said.

The minimum light required to maintain healthy bentgrass turf can be quantified in terms of the daily light integral, or DLI, Russell said. DLI is a measure of cumulative PAR described as “moles of light” — or “mol” — per square meter per day. “Mole” is a standard measure of substance used in chemistry and “moles of light” represents a standard quantity of photons.

Shade tolerance studies for putting greens have been conducted for warm season grasses like ultra-dwarf bermudagrass, but not for cool-season creeping bentgrass. Russell set out to determine how much shade creeping bentgrasses can tolerate and what management practices can help maintain healthy turf on shaded or partly shaded greens.

Russell worked with Division of Agriculture turfgrass researchers Doug Karcher and Mike Richardson to design a study to determine the minimum DLI requirement of a creeping bentgrass putting green. The study took into account the timing and intensity of shade.

The research and its results are explained in videos — a shorter summary version and a longer, more detailed version — available in a video playlist with other Division of Agriculture turfgrass research videos: https://www.youtube.com/playlist?list=PLzwlawVM4o4E7AMOiQT3byuf1TGFp5X49

Russell used shade screens to evaluate tolerance to varying daily percentages of shade tolerance. At the same time, he evaluated the effect of a growth regulator (Primo Maxx) and a foliar colorant (Turf Screen) for their ability to improve creeping bentgrass shade tolerance.

After collecting data for two years, Russell calculated that the creeping bentgrass in his study required a minimum DLI threshold of 30 mol per square meter per day.

“What this means,” Russell said, “is that light reduction of 70 percent or greater for at least half of the day causes turf quality to decrease.”

Russell said the study showed that the timing of the shade can make a difference in the effects on turf. “In the first year, in 2016, we observed that afternoon shade was more detrimental to turfgrass health than morning shade.”

The same effect was not observed in the second year, but Russell said the information may still be important to turf managers.

The study also showed that both Primo Maxx growth regulator and Turf Screen foliar colorant may help maintain or improve turf quality under shaded conditions, especially under peak stress in the summer.

The results of the study offer valuable information for golf course superintendents who balance turfgrass quality with aesthetics of their courses,
Russell said.