Solar technology is heating up in Arkansas agriculture

LITTLE ROCK – Fields across Arkansas seem to be sprouting solar panels as multiple growers take advantage of the one thing they can count on: the sun.

Solar energy is catching on with Arkansas farmers, which is a trend that is very promising for the state, said Rick Cartwright, head of the Cooperative Extension Service for the University of Arkansas System Division of Agriculture.

“I, for one, am very excited about the use of solar energy,” Cartwright said. “We used to talk about this when I was younger, but it just wasn’t practical and now that it is, I’m excited.” 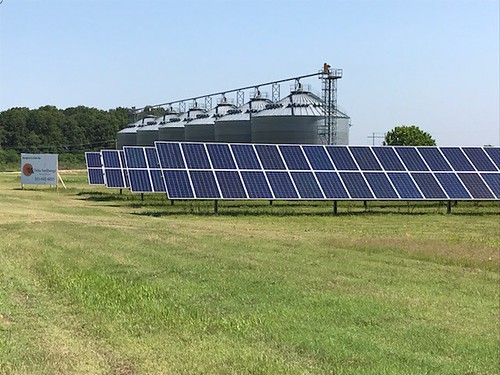 Cartwright said he and others are cooking up plans to incorporate solar technology in the Division of Agriculture.

“Solar technology is here,” he said. “Over time we’d like to figure out how to include it in our system and learn how to advise people in using it. For farmers, home owners and communities, we’re interested in any valid approach to helping them implement, not just solar technology, but other energy sources as well.”

“We started to look into solar energy about eight months ago,” Hood said. “We took the time to run the numbers and find out if this was going to be a good fit and when we looked at the long term benefits it was a no brainer. I really think this is going to catch on, it’s a great fit for growers in Arkansas.”

Although the benefits seem to be large, Hood has allotted just a small amount of land to his solar panels.

“I only have them on a little over an acre, that’s the beauty of it,” Hood said. “We have approximately 150 kilowatts of solar panels that produce approximately 240,000 kWh in electricity annually. That is enough to reduce our electricity cost by over 75 percent. It is a substantial savings for us and it makes our grain operation much more profitable. “

To get an idea of how much power that is, the average annual electricity consumption for a U.S. residential utility customer was 10,766 kWh in 2016, according to the U.S. Energy Information Administration. This means that with the energy Hood’s solar panels produces in one year, he could power over 20 average American households for one year.

Since implementing solar technology on his operation, Hood’s excitement is through the roof.

“We can monitor our electricity production every minute of the day in real time, and I’ve become kind of obsessed with checking it,” Hood said.  “I find myself running the numbers to see how much money I saved that day.  As a farmer I’m used to praying for rain, but now I’m torn because I know those clouds are going to hurt my solar production!”

“On a really good sunny day we can save as much as $80 a day based on our average cost of electricity,” Hood said. “It may not sound like a lot, but when you multiply that by 365 days it turns into some serious savings.”

His excitement is understandable. In a career where success depends on so many unpredictable factors, any constant can come as a relief. With solar panels, farmers can be protected from rising energy costs, and that security is a rare one.

“Knowing that one of our largest variable expenses is now fixed for the next 30 years gives us peace of mind,” Hood said. “We now know we are insulated from rising energy costs and that’s a big deal for this type of operation. In farming we deal with a lot of variables that are out of our control. Any time you can take one of those off the table, it reduces our risk and we like that.”

While the economics of it are reassuring, there are other bonuses that famers see. Wade Hill in Desha County came for the financial benefits, but stayed for the environmental impacts.

“I heard the benefits of farm savings and that was my main reason up front,” Hill said. “But I’m really in this for the green energy aspects of it.”

Hill said he has dedicated an acre and a half of land to his solar panels and uses them to power his irrigation wells.

Many Arkansas growers are becoming pioneers for solar technology in their state, and it seems as though the trend is stretching beyond farming operations. The Vines Center, a conference center that hosts businesses, 4-H, schools and other groups, is investigating a move into solar power, said J.J. Pitman, 4-H center director.

“At this point we are gathering information and researching options,” Pitman said. “Our hope is to reduce our use of traditional electricity. Lowering the cost of electricity will help provide more opportunities to further our mission of being a youth development campus. This will also reduce our carbon footprint.”

According to USDA, more than 57,000 farm business and other farms produced renewable energy in 2012, with over 35,000 producing solar energy specifically. This is more than twice as many in 2007.

For more information on agriculture production in Arkansas contact your local county agent or visit uaex.edu.

About the University of Arkansas System Division of Agriculture

The University of Arkansas System Division of Agriculture is an equal opportunity/equal access/affirmative action institution. If you require a reasonable accommodation to participate or need materials in another format, please contact your county extension office as soon as possible. Dial 711 for Arkansas Relay.