LITTLE ROCK — The nation’s No. 1 rice producer added even more acres this year, and its soybean growers planted the most acres since 1997, according to the Arkansas numbers from Friday’s Acreage Report from the National Agricultural Statistics Service. 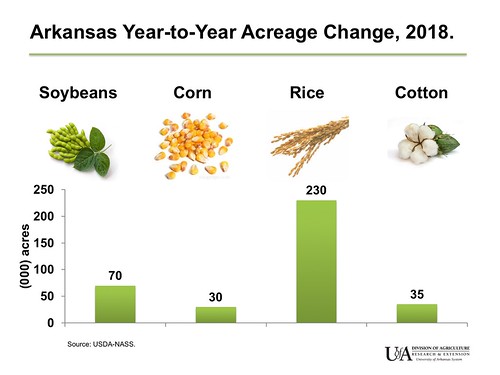 U of A System Division of Agriculture illustration by Scott Stiles

Scott Stiles, extension economist for the University of Arkansas System Division of Agriculture, said when the June Acreage Report comes out, “It’s always interesting to see how much change there was from the March intentions. This year, there was very little.” (See: https://www.uaex.edu/media-resources/news/march2018/03-29-2018-Ark-Prospective-Plantings-2018.aspx)

“As far as the Arkansas numbers go, the June Acreage was exactly the same as the March intentions for corn, cotton, soybeans, medium grain rice and peanuts,” he said. “The only adjustments were in grain sorghum and long grain rice.”

“Commodity prices for everything were higher this spring compared to 2017,” he said. “From January to May this year, new crop soybean futures averaged $10.34, corn about $4, and cotton 80 cents.”

COTTON
Cotton almost hit a half-million acres, clocking in at 480,000 acres in 2018, up from 445,000 last year. It’s the third straight year of increasing cotton acres in Arkansas, Stiles said.

“We’re seeing cotton in places we hadn’t seen it grown in 15 to 20 years,” said Bill Robertson, extension cotton agronomist for the Division of Agriculture.

“Their daddies and granddaddies grew cotton, but they hadn’t. The profit potential for cotton is starting to look better in the last few years.”

“There’s been a lot of pressure from the environmental community to start shutting down some of those polyester plants,” he said. “China had a ton of them. With low oil prices it was difficult to compete. Now, the main competition to cotton has fallen on some well-deserved hard times.”

GRAIN SORGHUM
“Growers backed off a bit on grain sorghum,” Stiles said. “Instead of the projected 15,000 planted acres expected in March, today's number came in at 10,000 -- up just 1,000 from last year's record low.”

“Rice has picked up more acres this year than all the other major crops combined. USDA sees total rice acreage for the state up 230,000 over last year; most of that increase is long grain, which is up 215,000 acres.”

Jarrod Hardke, extension rice agronomist for the Division of Agriculture, said the 1.391 million acres was in line with his projection of 1.4 million. What surprised him was how those acres were distributed between medium and long grain. NASS put medium grain acres at 180,000.

Hardke said growers had what seemed to be non-stop rain in the spring, followed by non-start rain.

“Planting progress was way behind what we experienced in 2016 and 2017,” he said. “I was beginning to scale back my projections because we were not getting that opportunity to plant.”

Once the ground began to dry, low-laying areas in fields – the ones “that tend to flood out, go into rice,” Hardke said. “We planted almost all those areas that we hadn’t had the opportunity to plant in the last few years. That’s certainly something that helped drive getting to the acreage number we achieved.”

Stiles was surprised too.

“With soybean prices holding well above $10 this spring, I thought we might see some late rice acres shift to soybeans,” Stiles said. “It appears that didn't happen as NASS' soybean acreage for the state held steady from March to June at 3.6 million. Rice prices hit some lofty highs in late April and that kept growers from shifting rice acres to soybeans.”

“This doesn’t surprise me, but it’s a little bit bigger than I was expecting considering there’s more interest in cotton and the rice prices,” Ross said.

Soybean growers will have an uphill slog this season.

“I don’t see us having yields like last year,” he said. In 2017, Arkansas saw a record state average yield.

“This is going to be a tough year for soybean growers,” Ross said.  Last year had ideal conditions for the crop, but so far this season, “I don’t see the hot, dry conditions letting up in the near future.

“The big kicker for soybean growers is the drop in commodity prices,” he said. “This is not the year that we need to have economic issues. Our guys already spent a lot of money getting control of the weeds, irrigation costs will be up and insects are starting the blow up.”

For more information on crop production and economics, visit uaex.edu or contact your county extension office.