LITTLE ROCK – Four people, including a pair of sisters, have been named finalists for the state’s highest 4-H honor, the Governor’s Award.

“Just being nominated for this is an honor and becoming a finalist all the more so,” said Angie Freel, interim 4-H department head for the Cooperative Extension Service, which operates 4-H in Arkansas. 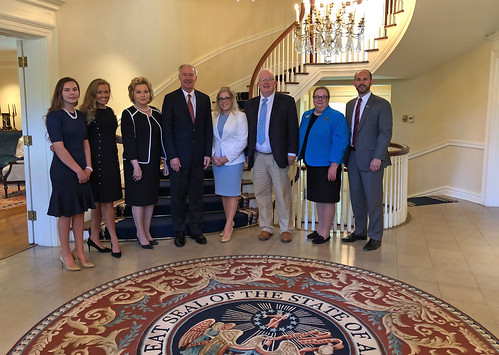 The finalists were interviewed June 26, by Chasse Conque, athletic director for UA-Little Rock; Rita Fleming, chief operating officer for the University of Arkansas System Division of Agriculture; and Rex Nelson, senior editor and columnist for the Arkansas Democrat-Gazette. Following the interviews, the nominees were hosted for lunch at the Governor’s Mansion by Gov. Asa Hutchinson and his wife, Susan, with Wes Ward, Arkansas’s secretary of agriculture, also attending.

“The judges were really blown away,” Nelson said. “We are optimistic about our future.”

Conque said that in talking to the nominees “it was a really great morning.”

The award-winner will be announced July 25 during a ceremony at state O-Rama at the UA-Fayetteville campus.

“Sara’s conviction to service defines her. Her resume is impressive, but when you see her in action, you know she is a difference maker,” said Kurz.

“We’ll have the place ready for you,” Susan Hutchinson said with a smile.

For more information about 4-H in Arkansas, contact your county extension office or visit https://www.uaex.edu/4h-youth/default.aspx.