LITTLE ROCK – Green tomatoes may not be your first “go-to” when grocery shopping, but don’t count them out, either. 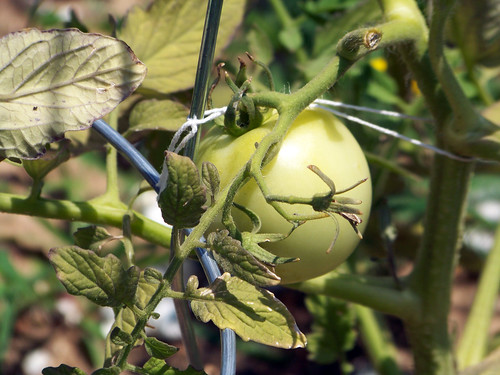 Carla Due, Miller county staff chair for the University of Arkansas System Division of Agriculture’s Cooperative Extension Service, said green tomatoes can be just as good, if not better, than traditional red tomatoes.

“Even though they do not taste like red, ripe tomatoes, green tomatoes do have their merits that deserve just as much attention as their red counter parts,” Due said.

Green tomatoes seem to have it all. They are low calorie and are packed with a variety of minerals and nutrients.

“Ripe green tomatoes are a very good source of vitamins A, C and potassium. They also contain iron, calcium, dietary fiber, magnesium and other minerals,” she said. “One cup of ripe green tomatoes is 41 calories, fat free, nine grams of carbohydrates, including 2 fibers and 7 sugars, and 2 grams of protein.”

Due said there is a significant difference in “real” green tomatoes and unripe red tomatoes that are green.

“There are two types of green tomatoes, unripe red tomatoes and those that are green when fully ripe,” Due said. “These are generally heirloom varieties, like Green Zebras and Green Moldavians, which are distinguishable from unripe red tomatoes.”

“Real green tomatoes often have vertical stripes or other variations in the coloring. They will feel soft when pressed and will taste much like a red tomato, possibly sweet or spicy depending on the variety,” Due said. “Unripe red tomatoes that are green when ripe will be pale green all over, feel nearly solid and will have a more acidic or tart flavor.”

There are several ways to put a unique spin on green tomatoes — they don’t have to be fried.

“When you hear the words ‘green tomatoes,’ your mind may go immediately to fried green tomatoes since they are a part of our southern food culture,” she said. “But there are dozens of Fried Green Tomato recipes out there, so instead try Grilled Green Tomatoes Caprese, featured in the 2011 Southern Living Cookbook.”

One half cup olive oil

Salt and pepper to taste

In a large zip top bag, combine first 5 ingredients; add tomatoes, seal, and shake gently to coat. Chill 1 hour. Preheat grill to 350° to 400° (medium-high) heat. Remove tomatoes from marinade, reserving marinade. Grill tomatoes, covered with grill lid, 3 to 4 minutes on each side or until tender and grill marks appear. Arrange alternating slices of warm grilled tomatoes and mozzarella cheese on a large, shallow platter. Drizzle with reserved marinade; season with salt and pepper to taste. Sprinkle with basil.

To learn more about fruits and vegetables in Arkansas contact your local county agent or visit www.uaex.edu.