As Arkansas cotton acres rebound, so do gin numbers
skip to main content

As Arkansas cotton acres rebound, so do gin numbers

LITTLE ROCK – The number of active cotton gins in Arkansas rose to 33 in 2017, paralleling an increase in cotton acres, according to statistics from the National Agricultural Statistics Service.

“With a recovery in cotton acres the last couple of years, Arkansas is also seeing some gins come back to life,” said Scott Stiles, extension economist for the University of Arkansas System Division of Agriculture. “In 2017 we saw two more gins operate than in 2016, one each in Craighead and Lee counties.” 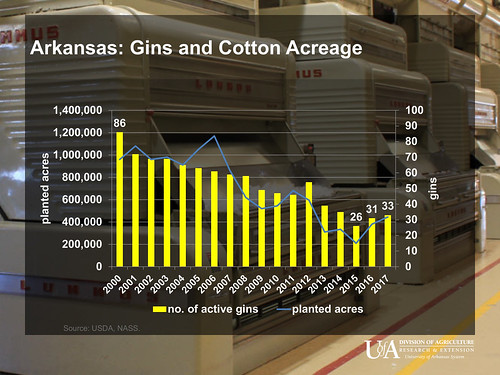 TRENDS — Cotton gin and acreage trends from 2000-2017. (U of A System Division of Agriculture illustration by Scott Stiles).

Stiles also said the NASS numbers pegged another increase: “The trend toward much larger and higher volume gins is certainly continuing.  A gin is definitely a massive investment in equipment that requires a lot of volume to make the numbers work.”

Craighead and Mississippi counties had the largest number of working gins in 2017, each with seven. Ashley County had four, St. Francis had three, and Lee and Poinsett counties each had two. Clay, Chicot, Crittenden, Desha, Greene, Lincoln, Monroe and Philipps counties each had one.

However, low cottonseed prices may put the brakes on growth, Stiles said.

“We may find in 2018 that even increasing cotton acreage may not be enough to sustain gin numbers in the state,” he said.

“From discussions at our winter production meetings I did hear of at least one gin that did not plan to operate this fall,” Stiles said. “They cited low cotton seed prices as the reason. Earlier this year cotton seed prices fell to decade lows. Revenue from seed sales is the lifeblood for gins.”