By Jessica Wesson
U of A System Division of Agriculture
June 19, 2018

(Newsrooms: RECASTS throughout, CORRECTS reference to national television. Please note we expect to have art from this event in Washington on Friday evening. File art may be found here:  https://www.flickr.com/photos/uacescomm/albums/72157692768378532 ; Tania pronounces her name Tah-NEE’-ah)

LITTLE ROCK – An impromptu rendition of the Etta James standard “At Last,” at the Governor’s Mansion has thrust Arkansas 4-H member Tania Kelley into a bigger spotlight: singing the national anthem for the Washington Nationals on June 22. 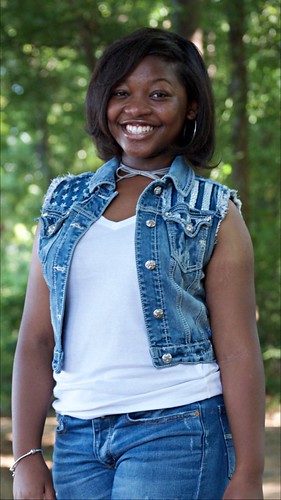 Kelley, the 14-year-old daughter of Tamara and Naaman Kelley, is a member of the Pulaski County 4-H Fine Arts Club in Little Rock. She recounted the burst of song that propelled her to the national stage.

Kelley was among scores of Arkansas 4-H members and scout group representatives participating in the April 27 Arkansas Congressional Awards kickoff hosted by Gov. Asa Hutchinson. (See: https://www.uaex.edu/media-resources/news/april2018/04-27-2018-Ark-Congressional-Awards.aspx) The VIPs included Rodney Slater, former U.S. Transportation secretary and who Marianna native who now serves as vice chair of the awards board, and U.S. Sen. John Boozman, whose three daughters were all 4-H members.

Her performance this Friday is part of two days of celebrations as the Congressional Awards program conducts an annual ceremony honoring its medal winners.

“We ate, listened to speakers, and met the senator and the governor. Someone came up to me and asked me what I wanted to be when I grew up. I told him I wanted to be a singer,” she said.

She was then prompted to give a sample of her talent. Kelley remembered that a hush filled the room as a crowd gathered around her.

“I was told to pick a song that really touched my soul,” she said. “I immediately thought of ‘At Last’ by Etta James, because I have been singing that song for a long time. I have grown close to the song.”

As the song poured out, “everyone got really quiet and came around. They started pulling out their phones,” she said.

Amazed at the attention she received, Kelly said she felt special in that moment.

“I felt important and noticed, which I liked. I spoke with one gentleman who said that ‘At Last’ was his wedding song. He complimented me by saying I sang it better than Etta James herself,” she said.

Kelley’s passion for singing came from other artists and family members, she said.

Kelley said she was contacted by Martha Ray Sartor, interim associate director for the Cooperative Extension Service, part of the University of Arkansas System Division of Agriculture, who presented a unique opportunity.

“We got a call from Dr. Sartor. She said that people in Washington wanted me to sing at the Nationals game. I was very excited when I heard the news. I have never done anything like that,” Kelley said.

“Through my gift I would love for my music to bring hope, happiness, and to inspire others. I feel like God blessed me with a talent and I would love the opportunity to use it all over the world,” she said. “And I feel like this opportunity is a part of my blessings and that I'm very grateful and thankful. I never dreamed that I would be in this space right now.”

The Washington Nationals baseball game is set for Friday, June 22 at 7 p.m. and will air on the Mid-Atlantic Sports Network.

For more information about the Congressional Awards, visit  http://congressionalaward.org. To learn more about 4-H, contact your county extension office or visit www.uaex.edu/4h-youth/.