By Ryan McGeeney
U of A System Division of Agriculture
June 13, 2018

LITTLE ROCK – The U.S. Department of Agriculture announced this week that researchers have confirmed the presence of the Longhorned tick (Haemaphysalis longicornis) in Benton County, Arkansas. 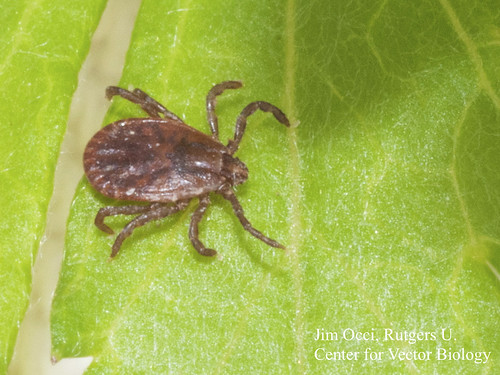 The tick, which is native to East Asia, was first detected in the United States in November 2017 in New Jersey.  It has since been confirmed in Virginia, West Virginia and now Arkansas. The Longhorned tick is known to carry and transmit both viral and bacterial tickborne diseases.

Kelly Loftin, extension entomologist for the University of Arkansas System Division of Agriculture, is involved in a statewide study of ticks and the diseases they carry. He said that the study, launched in May 2017, has collected and identified more than 7,000 ticks.

Loftin said that while the Longhorned tick may be a new arrival to Arkansas, residents should exercise the same precautions they would with the state’s existing tick population, rather than simply panic.

“I think the big concern right now is the unknown,” Loftin said. “We don’t know how it arrived in Arkansas, or how widespread it is. The Longhorned is a big pest to cattle in some parts of the world, so of course that’s a concern here, along with the viral and bacterial pathogens it may transmit.”

He said that while many articles in the popular press have noted the Longhorned tick’s capacity to transmit a virus associated with thrombocytopenia syndrome, the virus itself has not been confirmed in the United States.

And while the tick should certainly be taken seriously, the Longhorned tick doesn’t necessarily present any new challenges to the state’s human or animal populations, Loftin said.

“There’s a fear that it could transmit the Powassan virus, various other pathogens, possibly Anaplasma spp., and so on,” he said, referring to a parasitic proteobacteria that can affect dogs. “But we already have ticks capable of transmitting these pathogens.”

Loftin said there are a number of preventive measures concerned residents should take whenever exposure to ticks is likely. These include bodily protective measures, such as wearing long-sleeved shirts and long pants, tucking pants into socks, and applying insect repellent to both skin and clothes. Try to inspect yourself for ticks thoroughly as soon as possible after potential exposure.

Residents should maintain an effective tick control program on pets that are allowed outdoors. Keep piles of wood or rubbish should be kept far away from animals and homes, as they tend to serve as shelter or habitats for rodents, which can carry ticks, insects and disease.

Finally, if you discover an unusual tick on yourself or animal, or find large numbers of ticks on an animal, don’t panic. Loftin advises livestock producers and other residents to collect any discovered ticks and contact their local Cooperative Extension Service office, the Arkansas Agriculture Department or the USDA Animal and Plant Health Inspection Service for further instruction.

To learn about ticks and other insects in Arkansas, contact your local Cooperative Extension Service agent or visit www.uaex.edu.