By Ryan McGeeney
U of A System Division of Agriculture
June 4, 2018 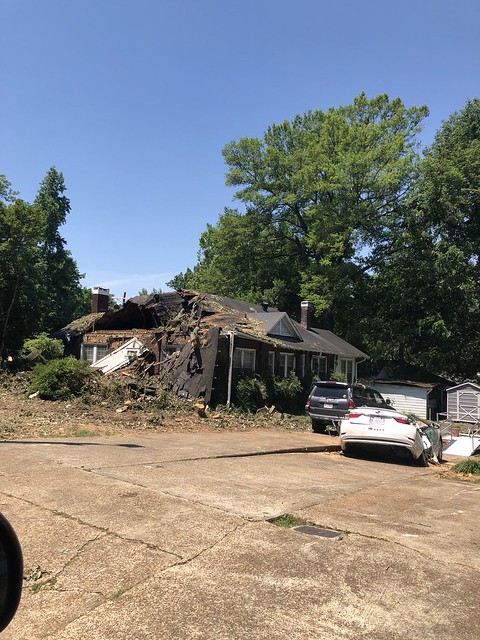 Beginning at about 11:21 p.m. Saturday, a “bow echo event,” in which the leading edge of a storm essentially outruns the rest of the storm, indicating high, straight-line winds, formed near Colt, according to the National Weather Service station in Memphis. Just nine minutes later, the event dissipated near Forrest City, Arkansas, about 10 miles to the south.

According to the National Weather Service, the brief storm carved a path two miles wide, with peak winds recorded at 100 miles per hour.

Cody Griffin, St. Francis County extension staff chair for the University of Arkansas System Division of Agriculture, said area damage included downed power poles and electrical lines, damaged or missing roofs from businesses and homes, and the near-complete destruction of the Delta Regional Airport in Colt, which suffered damage to both hangars and planes.

“It got pretty rough here,” Griffin said. “Forrest City is still without power.”

Other reports from the National Weather Service noted at least one collapsed home with people likely trapped inside, a damaged Waffle House restaurant and two overturned semi-trailers near Forrest City.

Griffin said that most of the agricultural damage he saw was limited to blown rice levies and downed corn, which may be able to stand up again.

Neighboring counties suffered some damage as well, though to a lesser degree.

Rick Wimberley, Cross County staff chair for the Division of Agriculture, said his county had its share of downed power poles and blown levies as well.

“We were needing the rain,” Wimberley said. “We didn’t need the wind to come with it. It’ll take a while for the rice fields to dry and firm up, so they can get equipment back in the fields to patch up. We had a lot of corn that was blown over. Let’s give it a few more days, and I think the majority of it will stand back up.”

Jeremy Ross, extension soybean agronomist for the University of Arkansas System Division of Agriculture, said he had received reports of damaged fields throughout counties in the northeastern part of the state, but that it will be about five to seven days before the fields can realistically be assessed. Ross said that about 800 acres of cotton in the area had been destroyed during the storm.

Griffin said Monday he planned to organize area 4-H members to aide cleanup efforts as early as Tuesday, although some members appeared to have begun efforts on their own Monday morning, based on social media posts.