After an April of freeze and frost, first tomatoes come in for southeast Arkansas
skip to main content

After an April of freeze and frost, first tomatoes come in for southeast Arkansas

By Ryan McGeeney
U of A System Division of Agriculture
June 1, 2018

BRADLEY COUNTY, Ark. – With one phone call on May 27, the question of whether Arkansas would have any tomatoes of which to speak in 2018 was answered. 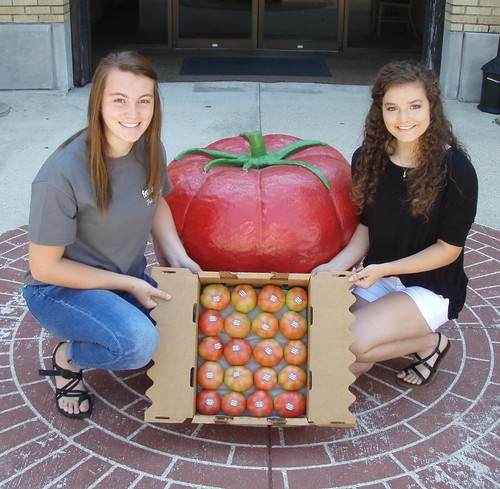 That Sunday, members of Clanton Farms in Hermitage, Ark., called in to the Bradley County Cooperative Extension Service office to say that the first box of Amelia tomatoes had been assembled for sale.

John Gavin, staff chair Bradley County CES office, said the call came at a time when some people, looking at both the calendar and the weather for this past April, were wondering if the state would see any tomatoes in time for te Pink Tomato Festival.

An outright freeze on April 8, followed by a hard frost April 15, took its toll on tomato tops across Ashley, Drew and Bradley counties — the tri-county area that represents nearly all of the state’s 800-850 commercial tomato acres.

“We’re actually running a little behind, due to the cold weather we had in April,” Gavin said. “But the warm weather’s helping us progress. We’re hoping to catch up.”

Gavin said that the first box to be brought or called in to an extension office is usually a sign that the rest of the crop will begin steadily rolling in. But, as is the case with some many aspects of agriculture in Arkansas over the last few years, this year may prove somewhat different.

Clanton Farms is perhaps the single largest tomato producer in the state, with 200-250 acres dedicated to tomato production, Gavin said, representing about a quarter of the state’s overall commercial tomato production. He said the first box was picked from one of the farm’s earlier-planted fields.

“Other farms are running a little behind the Clantons,” Gavin said.

As with many crops in Arkansas, large acreage allows for staggered planting, and hence a staggered harvest. While this is in part a limitation of manpower, it also helps diversify a crop’s growth stages, which can help it survive a rough weather event that occurs at a critical stage of plant development. But with such a short window (southeastern Arkansas tomatoes are typically planted in late March or early April, and harvest typically begins in late May or early June), a late freeze — followed by a frost and overall relatively cool temperatures — can leave its mark on everything on the farm.

“There’s no way of telling until you start picking,” Gavin said. “We are running later, no doubt about it. The crop had to be worked out of the damage. Tomatoes produce auxiliary buds that can make a new top. So if you lose a top, the main leader, you can grow another from one of the prunes or suckers. But that just takes time.

“Over all, the crop is looking good,” he said. “There’s a good fruit load, but maturity wise, we’re just a little behind, but catching up fast.”

To learn about tomatoes in Arkansas, contact your local Cooperative Extension Service agent or visit www.uaex.edu.