By Fred Miller
U of A System Division of Agriculture
June 30, 2017

FAYETTEVILLE, Ark. — To provide healthy food animals for a safe and secure food supply, sometimes you have to dig into the guts of the matter, said Dr. Steven Ricke, director of the University of Arkansas System Division of Agriculture’s Center for Food Safety. 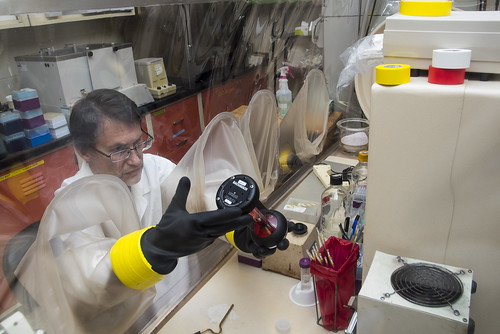 When Ricke says “guts” he means the gastrointestinal tract. And when he digs in there, he’s looking for really tiny living things that can have a big impact on animal health and, in turn, human health and nutrition.

Ricke, who is also professor of food science and holder of the Donald Buddy Wray Chair in Food Safety, studies gut microbiomes. He describes these as the genetic composition of a microbial community. They are complex populations of microorganisms — some good, some bad, some indifferent — that share space in animal G.I. tracts. He wants to know what’s in there, what they’re doing and how they interact.

To learn what’s living inside, Ricke and his collaborators employ next generation gene sequencing. The sequencing technology was initially developed for the Human Genome Project and significantly improves accuracy and speed, said Si Hong Park, a post-doctoral research associate who works with Ricke.

Park earned his Ph.D. in the University of Arkansas’ Cell and Molecular Biology Program, an interdisciplinary program that includes numerous colleges and departments. He initiated the gene sequencing study for his doctoral research and began working with Ricke then.

He recently accepted a faculty position at Oregon State University and is working to wrap up projects before he leaves the Division of Agriculture.

The gene sequencing is done in a machine called an Illumina MiSeq, an instrument in Dr. Franck Carbonero’s food science lab. “He has very graciously shared it with us,” Ricke said. “And it has been invaluable for our work.”

The raw data coming out of the machine represents sequences of the genetic code in strings of base pairs — the four nucleotides that make up DNA strands. Park uses “infomatics” software to interpret the data.

The program isolates and identifies the individual organisms represented in the raw genetic data. It’s a massive job, Park said, because the genetic sequencing data represents both known and unknown organisms.

The “unknown” organisms are largely microorganisms whose genes have not yet been sequenced, said Dr. David Stock, professor of biology at Stetson University in DeLand, another collaborator who was visiting Ricke’s lab recently.

“Essentially, we can sequence 10 percent of all organisms,” Stock said,

When the infomatics software identifies a string of DNA code that represents an organism not yet sequenced, it identifies it as an “operational taxonomic unit,” or OTU.

“The computer program tells you, ‘This is an organism, we just don’t know what it is,’” Stock said. “It’s like an untitled book.”

Fortunately, the genetic sequences are known for the microorganisms they are studying.

The Guts of the Matter

Their work focuses on poultry and cattle, but they’ve also sampled gut biomes of catfish, gerbils and ticks, Stock said.

“We’re trying to learn who’s there,” Stock said. “It’s a microbial census of the microbes these animals carry.”

They are also learning how the composition of the microbiome changes under different conditions, including the diet of the host animal, whether the animal is obese, or because of probiotic or prebiotic food supplements, Ricke said.

Probiotics are live organisms that are known to provide health benefits to animals (and humans), Ricke said. These are often used to populate an animal’s intestines in such a way that they crowd out illness-causing bacteria like Salmonella or Campylobactor.

Prebiotics are mostly carbohydrates that the host animal can’t digest but that feed the beneficial bacteria and keep them healthy.

“By microbiome gene sequencing, we can see how the rest of the microbial population react when introducing these compounds(probiotics or prebiotics),” Ricke said.

The data they’re getting is building a basis of knowledge on which they can develop best practices for improving animal health and protecting against illness-causing bacteria, Ricke said.

“Knowing the major players in the gut helps us target those beneficial microorganisms we may want to build up,” Ricke said.

They can also compare microbiomes in animals of different ages. “Age may be one of the most influential factors,” Ricke said. “Older animals have more diverse gut microbe populations.”

“When deciding whether to use probiotics or prebiotics, we’re learning the earlier the better,” Ricke said. “By maturity, the biome is pretty consistent.”

Ricke said their research also investigates food safety concerns during processing, specifically for poultry. “The animal brings in what it has in its gut,” he said, “and also is exposed to things during processing.”

Working with Division of Agriculture poultry scientist Casey Owens, they use genetic sequencing to characterize the microbiomes on chicken carcasses during processing. The division’s poultry pilot plant at the Arkansas Agricultural Research and Extension Center in Fayetteville offers the opportunity to monitor bacterial loads on the birds throughout processing.

Illness-causing bacteria like E. coli and Campylobacter are infrequent and can occur in such small population numbers that they are difficult to detect, Ricke said. It can be difficult to know if antimicrobial procedures during processing are effective.

So Ricke, Park and Stock are identifying “indicator organisms,” common, harmless and easy to detect microorganisms that behave the same way as pathogenic bacteria and respond in the same way to antimicrobial treatments.

If antimicrobial treatments remove the indicator organisms, Ricke said, it would affirm that any corresponding pathogens that may have been present would also be removed.

“Another goal,” Ricke said, “is that indicator organisms could give you a better idea of what is present when the animal arrives and which ones you may need to target for removal.”