LITTLE ROCK – The Arkansas State Plant Board voted Friday for an emergency rule banning sale and use of dicamba at a time the board’s pesticide division saw the number of complaints alleging dicamba injury to non-target crops grow to more than 240. 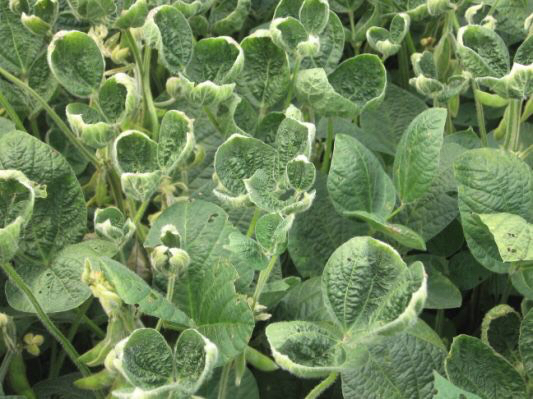 CURLING -- These soybean plants show signs of dicamba injury, indicated by necrosis on the leaf tip causes constriction, which makes the leaf cup upwards. The leaf surface may also show signs of blistering or puckering. Image courtesy of Bob Scott.

The State Plant Board’s action also seeks to speed implementation of enhanced penalties for misuse, with fines up to $25,000 for each infraction. The emergency rule exempts pastureland from the dicamba-use ban.

Engenia is the only dicamba herbicide permitted in Arkansas for use with row crop production past April 15 and it can be used with dicamba tolerant crops. Soybeans without the tolerance, peanuts and some fruit and garden crops are highly sensitive to dicamba.

The emergency rule goes next to Gov. Hutchinson for review, who would then refer it to the executive subcommittee of the Arkansas Legislative Council. If the rule passes muster with the governor and legislators, it would take effect upon being filed with the secretary of state’s office. It would be in effect for 120 days.

Until the emergency rule goes into effect, Engenia may still be used.

Before voting, the board heard an update from Susie Nichols, director of the State Plant Board’s pesticide division, noting on Friday there were 247 complaints alleging dicamba misuse, she said, adding that on June 11, the board had received 27 complaints. The following week, the number of complaints stood at 62 and by June 21, there were 153 complaints.