LITTLE ROCK – Arkansas livestock producers are being advised to make preparations for the arrival of what will be left of Tropical Storm Cindy once it’s done with the gulf states.

Cindy, the third named storm of the Atlantic Hurricane season, was expected to make landfall near the Texas-Louisiana line on Thursday morning, according to the National Weather Service. 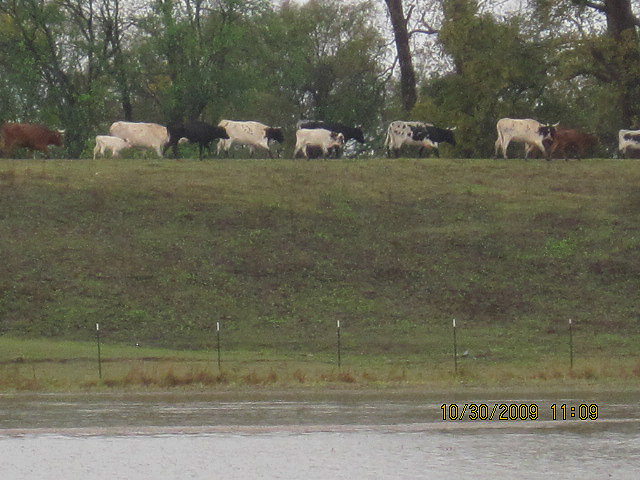 HIGHER GROUND – Cattle walk across the top of a levee on Friday in Jefferson County to avoid the rising water. (University of Arkansas Division of Agriculture photo by Don Plunkett.) October 30, 2009 file photo

“Remnants of the system should be in southern Arkansas early Friday and will exit toward the Tennessee Valley Friday night,” said John Lewis, senior forecaster for the National Weather Service at Little Rock.

Rainfall amounts across southeastern Arkansas were expected to be 1-3 inches, with some spots possibly receiving more than 4 inches.

Shane Gadberry, associate professor and extension ruminant nutrition specialist for the University of Arkansas System Division of Agriculture, said those in the path of the storm should “move cattle to higher ground if grazing in low-lying areas or along levees.”

Cattle producers also need to be prepared for the aftermath.

“Have fencing repair supplies on hand in case of damage from fallen trees,” he said. “Flooding will likely be short-term flash flooding, which can wash debris into fields that can be hazardous to grazing cattle.”

Because high Arkansas summer temperatures and humidity levels can prove deadly, “loss of power can mean significant loss to poultry operations, so backup generators should be checked,” Gadberry said.

Dustan Clark, extension veterinarian and associate director of the Center of Excellence for Poultry Science, recommends a check of poultry house fans and other house structures to “ensure everything is tight and won’t be chewed up or otherwise damaged by high winds.”

Poultry operations should also be sure there are adequate feed supplies on hand. “If roads are damaged and the power is out, additional feed deliveries could be delayed,” he said.

Homeowners might want to walk their property to look for trees or branches that could fall on people or property during high winds, said Tamara Walkingstick, associate director-Arkansas Forest Resources Center and an extension forester for the Division of Agriculture.

For those in the woods this summer camping, “they need to make sure they are not in a flash flood area,” she said. “They need to pay attention to what’s happening upstream and not just where they are.”

A flash flood in June 2010 killed 20 people at the Albert Pike campground after the Caddo and Little Missouri rivers swelled from their banks following 6-8 inches of rainfall.

Vic Ford, associate director-agriculture and natural resources-extension for the Division of Agriculture, said the storm could be welcome to farmers with unirrigated fields.

“Rice farmers in the Delta need to watch water levels and water flow so that levees and gates are not broken,” he said. “The rain will be a welcome sight to most farmers without irrigation on their fields.”

Ford said he expected fields and forests to be difficult to access after the rain.

“Cultural activities such as spraying, cultivating, or fertilization will either have to be accomplished by air or wait for the soil to dry, which will not be long due to higher temperatures,” he said. “Haying will have to cease until more favorable conditions arrive. Loggers may have to curtail activities until the soil dries in a few days. For all operations, equipment must be moved before the water levels rise.”