ARKADELPHIA, Ark. – Hardwood pulp prices should remain strong, pulp pinewood may be brighter in the coming decades, but pine saw timber will likely remain static for the foreseeable future, according to predictions for Arkansas’ $6.3 billion forest industry. 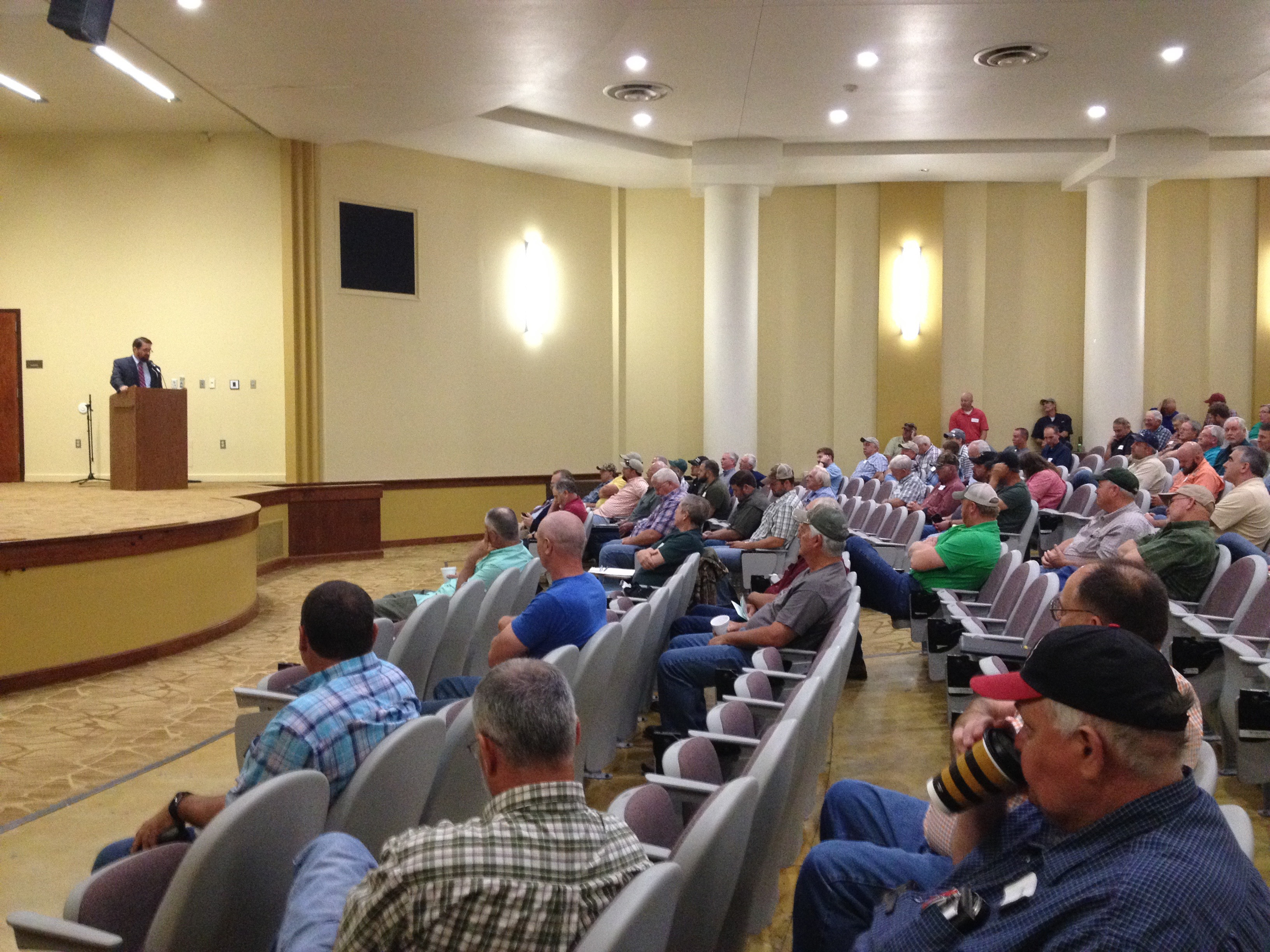 POLITICAL PERSPECTIVE — Cory Cox, legislative director for Attorney General Leslie Rutledge, provides the political perspective on forestry to a meeting of registered foresters. June 1, 2017. (U of A System Division of Agriculture photo)

More than 200 foresters got a multifaceted view of their industry including ethics, wildlife, politics and economics from speakers during the June 1 event organized by the Cooperative Extension Service and held at Henderson State University.

“Hardwood pulp prices are higher because we have four large paper mills -- Domtar, Evergreen, Georgia Pacific-Crossett and Clearwater -- that all use large amounts of hardwood in their paper making processes,” Pelkki said. “Only Green Bay in Morrilton does not use hardwoods for making its products.

“Recently, Domtar converted a third of its production from a hardwood-dominant use for uncoated free sheet – copier paper to pine fluff pulp for the export market,” he said. “This took full effect this spring. Hardwood pulp prices in southwest Arkansas have really fallen, it just hasn’t shown up on the price reports yet.”

Pelkki expected to see improvement for pine pulpwood in the coming decades.

“Pine pulpwood again just has a supply that vastly exceeds demand,” he said. “Even when Sun Paper and Highland Pellets get into full swing, the supply will overwhelm demand for about five years.”

Highland Pellets’ $229 million plant at Pine Bluff will produce wood pellets for generating electricity. These pellets are aimed for export to Europe. Shandong Sun Paper is building a $1.3 billion plant near Arkadelphia and when open, is expected to process some 400 truckloads of small timber every day.

“Because in the last five or six years, landowners have delayed cutting saw timber and replanting pine, I suspect that in about 12-15 years we should see pine pulpwood in Arkansas reaching the Southeastern United States average price of $11-13 per ton,” he said.

As for pine saw timber, its “supply is overwhelming in Arkansas, and when Sun Paper and Highland Pellets really start thinning pine pulpwood stands, the pine forests of south Arkansas will grow much more rapidly and quickly produce a lot of saw timber,” Pelkki said. However, “for this reason, chip-n-saw, or small saw timber, which produces more chips for paper than wood for lumber, should respond to the growing demand for pine pulp in the next five years.”

Timber from a political perspective

Cory Cox, legislative director for Attorney General Leslie Rutledge, offered a political perspective on the forestry industry. Cox stepped in to speak for Rutledge after the attorney general had been called to Washington to attend the president’s signing of legislation to assist law enforcement officers and veterans and to visit with officials from the Department of Agriculture and the Environmental Protection Agency.

Living in Perry County, Cox said he’s surrounded by the timber industry, which employees many of his friends and noted how it pervades the entire state. On a personal note, “I went to college because daddy sold timber off our farm.”

He praised the work done by the extension service and said that Rutledge had invested $2.5 million with the Division of Agriculture because “it’s important to keep those programs going.”

Forestry and agriculture will both find the Trump administration and Rutledge to be friends, Cox said and noted her challenge to a number of environmental regulations.

“The attorney general is a strong believer in clean air and clean water,” he said. “What she does not believe in is one-size-fits all rules that are pushed down from Washington, D.C.”

“We know that no one understands conservation better than those in the agricultural industry,” Cox he said. “You can trust agricultural producers to do the right thing. It’s incumbent on them to take care of their resources so they can have jobs in the future.”

Those at the session also heard from Vic Ford, interim associate director for agriculture and natural resources for the Cooperative Extension Service, who spoke on ethics in forestry. Registered foresters are required to have one hour of ethics training each year. The group also heard from Corey Gray of the Arkansas Game and Fish Commission who gave an update on the chronic wasting disease situation in Arkansas.

For more information about the economics of forestry see http://bit.ly/Ark-Forestry-2017.