By Mary Hightower
U of A System Division of Agriculture
June 6, 2017

PERRYVILLE, Ark. – They’re called fall armyworms, but this year, they’re not even waiting for summer to bring their appetites to Arkansas’ lawns, pastures and rice fields. 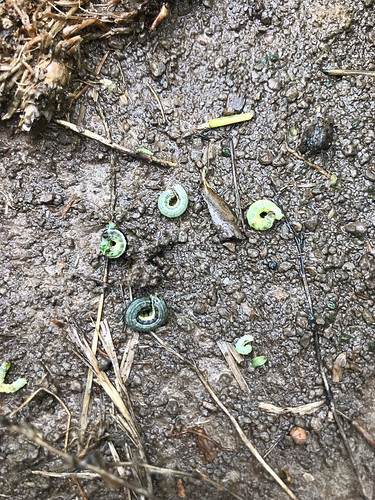 Monday evening Kevin Lawson, Perry County extension staff chair for the University of Arkansas System Division of Agriculture, noted hungry little caterpillars on some rice in his county, and urged those with sod farms, pastures and hayfields to “start scouting now.”

“This is very early,” he said Tuesday. “Now is the time to keep an eye out.”

Fall armyworms typically don’t debut until July, but with the relatively warm winter and spring, “everything is early this year,” Lawson said. “It’s going to be a big insect year for our farmers.”

He said growers in his county were already anticipating the pests and had stocked up on control products. For those producers getting ready to cut hay – cutting the hay would be the best form of control.

Farmers aren’t the only ones affected. Armyworms have strong appetite for Bermudagrass and can often make a lawn disappear overnight.

True armyworms appear in spring and look similar to fall armyworms, and both can be very destructive. True armyworms are green with brown or black paired spots along their backs. Fall armyworms have dark stripes and a light-colored marking that looks like an inverted Y on their heads.

Fall armyworms are sensitive to cold and overwinter in southern Florida, southern Texas and in Central and South America, said Kelly Loftin, extension entomologist for the Division of Agriculture. “They make their way to Arkansas on wind currents from the south.

“Initial moth flights, which vary in size and timing, will influence severity and timing of fall armyworm outbreaks,” he said. “Unlike the nocturnal true armyworms, fall armyworm caterpillars feed any time of the day or night but are most active early in the morning or late in the evening.”

When they appear, they are hungry.

“Often, after a severe fall armyworm infestation, the only vegetation left in the field will be tough stems,” Loftin said. “Fall armyworms seldom kill healthy, established bermudagrass. However, newly established stands of bermudagrass, fescue and winter annuals such as rye, ryegrass, and wheat are at risk of stunting or dying.”

Loftin said that although pyrethroids work quickly to kill the worms, they have limited residual activity.

Products available to control both armyworm species in forage are updated annually and listed in MP144, Insecticide Recommendations for Arkansas, available at https://www.uaex.edu/publications/pdf/mp144/mp144.pdf.

Information about the pests is also available in: Managing Armyworms in Pastures and Hayfields, https://www.uaex.edu/publications/PDF/FSA-7083.pdf

Mention of commercial products does not imply endorsement.