By Fred Miller
U of A System Division of Agriculture
June 24, 2016

FAYETTEVILLE, Ark. — Susan Watkins, professor of poultry science and poultry extension specialist for the University of Arkansas System Division of Agriculture, was named the 2016 Industry Leader of the Year by The Poultry Federation. 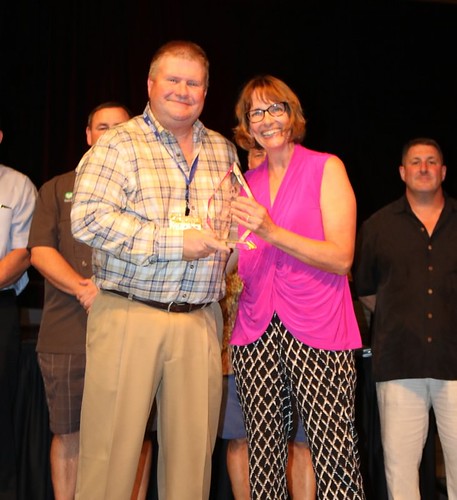 The award was presented by federation president Marvin Childers and members of the group’s board of directors during the 57th Annual Poultry Festival in Rogers June 17-18.

The Poultry Federation is a tristate trade association representing the broiler and egg industry in Arkansas, Missouri and Oklahoma. Watkins has been active in the organization, planning and executing the annual Live Production Symposium. She is also the secretary and program coordinator for the federation’s turkey committee.

Watkins is revered as a teacher and mentor by poultry science students at the University of Arkansas and serves as the poultry science department’s internship coordinator. She is also director of the Division of Agriculture’s Applied Broiler Research Farm and coordinator of the unit’s field days.