Midweek storms cause greensnap in corn
skip to main content

Midweek storms cause greensnap in corn 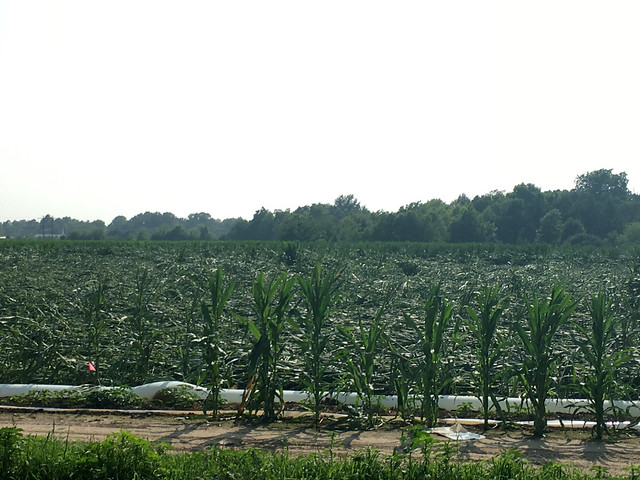 OH SNAP -- Green snap in corn in St. Francis Co., Arkansas. (U of A System Division of Agriculture image by Cody Griffin)

“We are getting several reports of greensnap in corn in the Cross, St. Francis and Poinsett counties from the storms that went through yesterday evening,” Jason Kelley, extension wheat and feed grains agronomist for the University of Arkansas System Division of Agriculture, said on Thursday.

“Unfortunately, with rain comes wind this time of year.”

Cody Griffin, St. Francis County extension agent for the Division of Agriculture, said greensnap was also seen in his county.

Kelley said that while some corn hybrids may be more prone to greensnap, “under very high winds, they can all snap. Unfortunately, greensnap can be very detrimental to yield.”

Corn that’s pushed over by wind – a condition called lodging – may have a limited ability to stand back up depending on growth state. However, at this point in the season a broken stem is beyond recovery.

“The crop has little capacity to compensate for losing plants and whatever percentage of the plants snapped generally equates to about that much yield loss,” he said. “If the stem snapped below where the ear would be, then yes, the plant is done.”