By Fred Miller
U of A System Division of Agriculture
June 16, 2016

FAYETTEVILLE, Ark. — Blackberry growers learned how the University of Arkansas System Division of Agriculture supports their businesses from field to market during a blackberry workshop and field day June 9 at the Fruit Research Station. 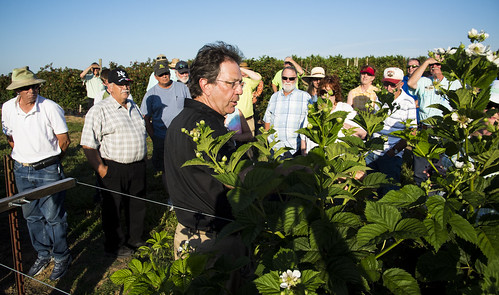 More than 90 fruit producers from Arkansas and neighboring states heard from Division of Agriculture and USDA scientists about scientific advancements in breeding and horticultural practices.

Amanda McWhirt, extension fruit and vegetable specialist, said increasing consumer demand for blackberries was beginning to outpace production. Prices begin to rise at about the same time that production in competing countries begins to fall off.

These periods coincide with key production times for southeastern blackberries, including those from Arkansas, from late May through early August, McWhirt said. Highest prices for blackberries are usually observed in September through early November.

McWhirt described what was necessary for establishing blackberry production. “It begins with year zero,” she said.

Planning begins a year before anything is planted, McWhirt said. Farmers need to think about where they will plant the blackberries.

“Site selection is important,” McWhirt said. “You need a location with full sun, well drained and deep soil. It should have good air flow and have access to irrigation sources and roads.” She added plants should be placed to avoid cold, frost or areas where wet spots linger.

Growers planning to start a new berry farm also need to investigate where to sell their produce. McWhirt said options include pick-your-own or farm stands, where consumers come to the farm, or shipping to commercial markets like grocery stores. 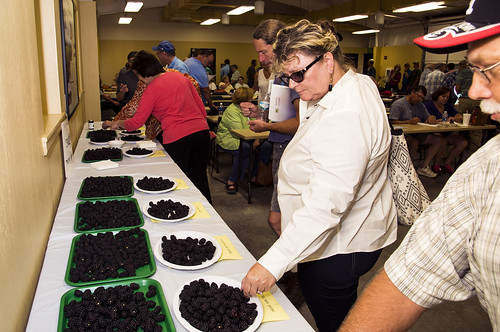 Producers can also consider using high tunnels to extend the growing season, McWhirt said, but added that would be a whole other workshop.

McWhirt said the Division of Agriculture has a lot of resources, including publications to help new growers get started as well as aids for established farms. She can be contacted by email — amcwhirt@uaex.edu — or followed on Twitter — @fruitveg_uaex.

County Extension offices also have a lot of information, including fact sheets, McWhirt said, and are a good place to begin.

The crossed arms can control sun exposure on the canes by changing the angle of the trellis. In times of severe weather, the trellises can be lowered to the ground to avoid high winds or be covered up to resist sudden frosts and other weather hazards.

Bill Jacobs, owner of Owasso Tree and Berry Farm north of Tulsa, Oklahoma, said RCA trellises helped improve the quality of the blackberries on his you-pick farm. In addition to providing freeze protection in the spring and fall, the system virtually eliminated berries fallen on the ground and even reduced damage from birds.

“There’s no place for the birds to perch,” Jacobs said, referring to the fact that the canes are grown closer together on RCA trellises than on more tradition trellises, leaving less wire available for perches.

The system also encourages the canes to grow straighter with less “bushiness,” Jacobs said. The result is that the berries all grow on the outside of the plants, leaving none hidden deeper in the bush.

“You-pick customers love it,” Jacobs said, “because picking is easier.”

Among other presentations, Daniela Segantini, a visiting scientist from Brazil, discussed her research on post-harvest storage of fresh market blackberries.

Fruit begins to deteriorate the instant it is removed from the plant, Segantini said. “We can preserve quality, but we can’t improve it after harvest.”

Segantini studied the effects of storage on five University of Arkansas System Division of Agriculture varieties. She found that high quality could be maintained for seven days with proper storage practices.

These included harvesting the berries in the morning, before daytime temperatures climbed, and transporting them in coolers or refrigerated trucks.

Researcher Renee Threlfall described Division of Agriculture sensory evaluation research in which a panel of consumers taste test blackberries and describe what they like and dislike about each variety sampled.

The feedback helps the breeding program to know what consumers want, Threlfall said.

Among other things, the study revealed that the most important traits consumers look for in blackberries were color and flavor, especially sweetness.