By Mary Hightower
U of Arkansas System Division of Agriculture

LONOKE, Ark. -- More loans and fewer farmers may be what’s left when floodwaters from the remnants of Tropical Storm Bill recede in Arkansas.

The somewhat good news Wednesday was that forecasters didn’t expect the Red or the Arkansas rivers to approach the devastating flood levels of May and early June. 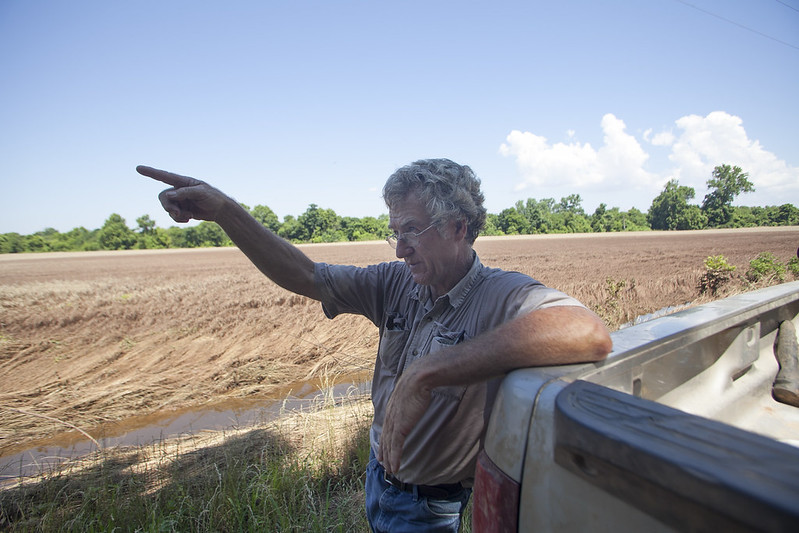 RYAN MCGEENEY / UNIVERSITY OF ARKANSAS SYSTEM DIVISION OF AGRICULTURE — 06/10/2015 — Lafayette County farmer David Dillard and his family have been engaged in the "Red River Shuffle" for several weeks, moving hundreds of cattle from one pasture area to another, in an effort to keep them fed and safe as different areas of the county flood and dry. Dillard said his family has been farming in the area for about 100 years. His grandmother, now 84, said she has survived more floods than she can remember, beginning when she was a child.
The producers of Lafayette and Miller counties in southwest Arkansas have been dealing with extraordinary amounts of rainfall, and the strongest flooding since 1990. The two counties are separated by the Red River, which flows east into Arkansas from Texas, then south into Louisiana.

Bill, which was downgraded to a tropical depression after making landfall Tuesday in Texas, was drawing moisture from the Gulf of Mexico into Texas and Oklahoma on Wednesday as the center of the low dawdled northward to the Dallas-Fort Worth area.

Based on a forecast of 5-7 inches of rain falling in Oklahoma, Tabitha Clarke, senior service hydrologist for the National Weather Service at Little Rock, said Bill probably won’t bring a repeat of the flooding seen in May.

“As far as the levels we saw before, it’s not going to get that high,” Clarke said. She was expecting moderate flood levels at Morrilton and Ozark and minor at Dardanelle.

In southwest Arkansas, where the Red River prompted evacuations and forced ranchers to shuttle cattle to higher ground, the river at Fulton next Monday morning was expected to be 21 feet and rising.

“That’s down considerably from the previous crest,” said Mario Valverde, meteorologist in charge at the National Weather Service in Shreveport, Louisiana.

Valverde warned that the rate of the river’s rise would depend on where the rain was falling. “If it falls where the reservoirs can capture some it  … and there’s some capacity left … that will mitigate how fast it raises. If it falls in the wrong places, not in the drainage systems, it’ll come up faster.”

Robert Stobaugh, a crop producer in Pope County, said he keeps a sharp eye on the National Weather Service hydrographs, which show anticipated river crests and their duration. The shapes of those graphs help him decide whether to work flood control structures to keep water from backing into the fields. More than 2,000 of his 6,000 acres has seen flooding this spring.

“If they show a sharp peak, it’s not worth our while to do all that work if it’s just going to pop up and go back down,” he said. “If it goes into a flat top for an extended period of time, that’s when we get agitated.”

Stobaugh is in the do-over phase of corn planting after the Arkansas River took the first round. With the kind of humor only farmers can manage in dark times, he called the earlier planting a “practice run.”

“Planting corn is over $100 an acre. No matter how many times you do it, it doesn’t get any cheaper,” he said.

“We’ve planted everything we could physically work back down to the mud and water,” Stobaugh said. “Right now, we’ve just about exhausted all the areas that we can do work on.”

The forecast heaps more frustration on farmers. Heavy rain in May prevented planting in some fields until June; and where farmers were able to plant earlier, some of that crop had been buried by as much as 8 feet of water.

With any crop, the idea is to plant early enough to give the plants time to mature before the first frosts hit in October or November. With some crops, now it’s too late. Fast maturing soybeans are the only option left for many growers, and even then, each day that draws farmers closer to that first frost, cuts their yield potential significantly. About 3 percent of the state’s soybeans are grown in the Arkansas River Valley.

Seed vigor -- the seeds’ ability to grow -- also declines the longer they’re stored in warm, humid conditions. Producers can have their seed tested by the Arkansas State Plant Board to see how much growing potential is left. If it has declined, growers will have to increase the amount of seed they put in the ground to get an acceptable stand, and “then you start running into late season disease and insect pressure.”

Ross said, “another catch that you’ve got to think about is what you’re going to plant next year.” There’s a 10-month waiting period to plant rice, sorghum and corn behind certain soybean herbicides. “We’re already into that 10-month plant-back window,” he said.

Rice seed doesn’t store well either, said Rick Cartwright, associate director-Agricultural and Natural Resources for the University of Arkansas System Division of Agriculture. “Unless you’ve got controlled humidity and temperature, it’s difficult to keep vigor up.”

The seed “can’t be sold for food if it’s been treated (against pests) and doesn’t store well,” he said. What’s troubling is “if they have another flood event the treated seed will have to be disposed of properly, a huge loss.”

There aren’t many economic options left either. Even if growers see 30 bushels of soybeans an acre, at $9 a bushel, that’s $270 an acre. Half of that amount will likely go to rent, the rest has to cover weed, disease and insect control, fuel for combines, the cost of the seed, and the cost to haul the harvested crop to market.

“I’m not sure some of our guys are going to survive this,” Cartwright said.

Scott Stiles, extension economist for the University of Arkansas System Division of Agriculture, said that if growers have “a federal crop insurance policy which includes prevented planting coverage, they could get some compensation for investments already made in field work or other inputs applied up to this point.”

“This doesn’t necessarily mean farmers won’t continue planting soybeans after the ‘prevented planting’ dates, but insurance coverage is reduced for crops planted after these key dates,” Stiles said. “Growers may come to the conclusion it's best not to plant at all given the current commodity price situation.”

Otherwise, “low interest loans may be the only option they have,” he said. “And the last thing anyone wants is another loan.”

Videos of agronomists with crop salvage info can be found at: www.youtube.com/user/ARextension.

For more information about crop production contact your county extension office or www.uaex.edu or http://arkansascrops.com.

Dir. of Communication Services
U of A Division of Agriculture
Cooperative Extension Service
(501) 671-2126
mhightower@uaex.edu