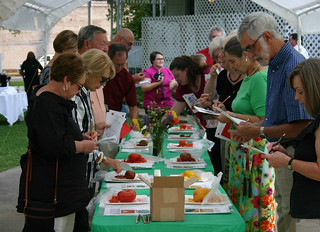 TASTING -- Attendees at the 2012 Tomatoes at the Trotter taste the wide diversity of this fruit. (Image courtesy UA-Monticello)

MONTICELLO, Ark. -- The fourth annual “Tomatoes at the Trotter,” on Thursday will light up the taste buds with culinary twists such as Georgia Streak creme brulee with bacon, caramel and whipping cream.

Event takes place at the University of Arkansas at Monticello’s historic Trotter House bed-and-breakfast at 404 North Main Street in Monticello.

“Tomatoes at the Trotter” works to promote awareness about heirloom tomatoes, to provide information about newly discovered varieties of heirloom tomatoes that have not been made known to the public and ways that these tomatoes can be used in cooking, said Bob Stark, professor of agriculture economics for UA-Monticello and the University of Arkansas System Division of Agriculture’s Southeast Research and Extension Center.

The event began as an integration of heirloom tomatoes into commercial vine-ripened tomato operations. With more than 400 heirloom tomato varieties, the project purpose was to get recognition among consumers and the market to grow well in the state.

“It became very popular with the community and has been attended by several VIPs such as state representatives, state senators, mayors, county judges” and others, said Paul Francis, professor of crop and soil science at UA-Monticello.

The event begins with heirloom tomato tasting at 6:30 p.m. There will be 15 varieties of heirloom tomatoes available for tasting, such as the Cherokee Purple, Original Arkansas Traveler and Moonglow. Twelve of these had not yet been publicly introduced in Southeast Arkansas, Stark said.

The evening will also be filled with an eclectic heirloom tomato four-course menu featuring smoked Cherokee Purple tomato and basil bisque as an appetizer and that Georgia Streak creme brulee with bacon, caramel and whipping cream as dessert. Chef Brian Cherry uses heirloom tomatoes as the main ingredient in each course.

“It’s a very special, very unique menu that he has put together,” Stark said.

After the dinner, Cherry will talk about the menu and the specific heirloom tomatoes used in each course as well as why he chose them.

Featured speaker for the event is Zach Taylor, director of marketing for the Arkansas Agriculture Department. He will discuss the growing popularity of local food sources, keys to successful farmers markets, and how the agriculture department helps the local communities in the state.

Tickets are $25 per person, with proceeds benefiting the UA-Monticello School of Agriculture scholarship fund. To learn more about Tomatoes at the Trotter and to RSVP call the school at (870) 460-1091.