MARIANNA, Ark. – Despite all of the struggles to get corn planted last spring, the June 28 USDA crop acreage report indicated Arkansas farmers planted approximately 810,000 acres of corn in 2019. That is the second highest acreage in recent history, only slightly behind the record year of 2013. 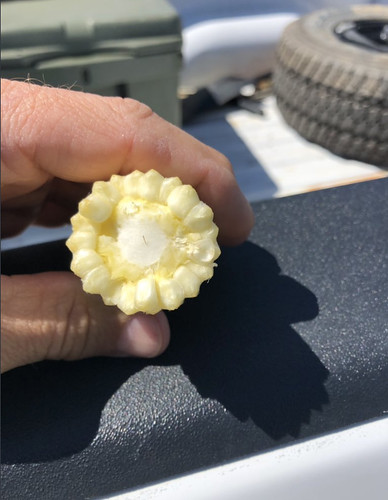 “The corn crop, like every other crop, has had some real challenges this year from delays in planting due to wet weather and flooding to just a struggle to get a good stand,” says Jason Kelley, extension wheat and feed grains agronomist for the University of Arkansas System Division of Agriculture. “Mother Nature has thrown a lot at this corn crop and, unfortunately, that’s resulted in more acres being replanted due to poor stands than in any given year since 2007. It isn’t just a field here and there, either, every corn of the state has been affected to some degree.”

The lofty planted acreage number may not be met at season’s end.

“It is doubtful that we will harvest that amount of acres, as some acres were lost during the flooding in May,” says Kelley. “This acreage estimate is higher than most anticipated, but does take into account late-planted corn that was a significant amount in some areas of the state.”

“Looking across the state, we’ve got corn in many stages as you might expect when we plant corn from March through June, which will also spread out harvest considerably longer than most years. We’ve got some corn that’s only about thigh-high that was planted in June and, down the road, you may see a field that tasseled three weeks ago.

“At this point, most of the early-planted corn is tasseling, silking, and some of the earliest planted will be nearing maturity later this month. From the road, there is some really good-looking corn fields while other fields had some poor areas and those poor areas will still be there come harvest.”

“For optimum yields we don’t need any excessively warm temperatures, especially at night,” he said. “Fortunately, temperatures have been in our favor so far, but warmer temperatures appear on the long-term forecast. We’ve also been catching rain across much of the state, which has helped cut down on irrigation costs. Approximately 90 to 95 percent of the corn grown in Arkansas can be irrigated.

“There’s still a long way to go before harvest, of course, especially on late planted corn.”

Where is the corn?

Is corn acreage scattered throughout the state?

“Jefferson County, Lonoke County, Arkansas County in the southeast-central region is where the greatest acres have been in the last few years and likely true this year as well,” says Kelley.

“In 2018, Jefferson, Lonoke, and Arkansas County each had approximately 40,000 acres of corn. (Last year), there were over 40 counties in Arkansas that grew corn in the Delta, Arkansas River Valley, and Red River Valley of southwest Arkansas.”

Recently, there have been some questions about southern rust – a foliar disease that can be controlled with a timely fungicide application. “Southern rust is our No. 1 disease concern.  Southern rust blows in from the south every year. Most years, with early planting, our corn can outrun most of the issues. However, with a large portion of our crop planted later than normal, southern rust could be a big issue for us. As of today, we haven’t found any southern rust in Arkansas although it has been confirmed in Louisiana, Mississippi, and Texas. So, it’s a matter of time before it is found here.”

What about grain sorghum and sugarcane aphid numbers?

Grain sorghum acreage in Arkansas is down dramatically compared to just a few years ago, says Kelley. “Acreage is less than 10,000 acres this year. Relatively low grain price, limited locations to sell grain sorghum, and the sugarcane aphid all are playing a part in reducing Arkansas grain sorghum acres.

“The sugarcane aphid population has found its way to Arkansas again this year. It’s been found on grain sorghum in Chicot and Crittenden counties, so far. The introduction of the sugarcane aphid has been a real game changer for grain sorghum producers. We used to spray for sorghum midge and/or headworms and then we were done with insect management, but now producers need to evaluate aphid levels all the way up to harvest and control can add a considerable amount of cost and time to production.”